This is really unusual and very stressful. One very bad place to put your head is particle accelerators. But on the historic day with this incident, July 13, 1978, a Russian scientist with the age of 36, Anatoli Bugorski has done this deed.

This is the accelerator that he handles in Russia or at the Institute for High Energy Physics in Protvino, near Serpukhov, Russia. To see that something was wrong, Bugorski stuck his head into a channel with a stream of proton beams in it, it was said that the power of this proton beam was very strong. He didn’t know that the accelerator was still up and running and the warning light that should have warned Bugorski had been turned off during the experiment and until this happened had not been reactivated. When the proton beam passed and hit his head, what happened? His brain was electrocuted. Surprisingly, Bugorsky did not feel anything (no pain), but it was reported that he saw flashes that were brighter than 1000 suns.

However, Anatoli Bugorsky knew that he had been hit by a very strong proton beam, but at that time he did not tell anyone. But he calmly got the job done and he wrote about his working visit to the accelerator in his journal. Then, he waited for what the symptoms would be, of course with an unpleasant and worrying feeling. As it turned out, that night the left side of his face began to swell, that night he was uncomfortable and could not sleep, and Bugorsky decided to have him checked by a doctor. At that time he was rushed to Moscow and there he was treated in a special place for patients exposed to radiation or radiation poisoning. 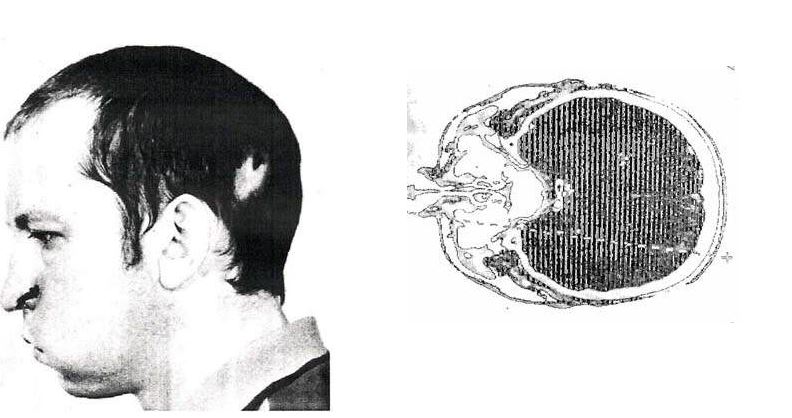 Too see: 10 Cartoon Houses That Exist In The Real World

Some sources seem to disagree with how much radiation Bugorski absorbed, but some sources say that Bugorsky absorbed 200,000 to 300,000 rad of ionizing radiation. No other human being emitted such a large beam of radiation besides him. Usually, a radiation dose of 400 to 1000 rads is sufficient to kill a person. But Bugorsky survived a proton beam hit of 300,000 rad. because it is considered a focused beam. Unlike the case with Chernobyl or Hiroshima, both are victims of gamma rays, high energy from head to toe. But in Bugorski, the light enters from the back of the head and out of the nose. It destroys nerves, tissues, and attacks the brain and makes a hole in the brain. While the side of his face became paralyzed, his vital organs such as his bone marrow and digestive organs were still safe. Indeed the scar from his head healed over time but the side of his face remained paralyzed and could not be healed. One more thing, if Bugorski loses his hearing, and he also has frequent seizures, but this doesn’t affect his intelligence, he remains as intelligent as ever.

18 months later, Anatoli Bugorski returned to work as a scientist, but regularly he had to come to the clinic in Moscow. He continued to pursue the world of science and earned his PhD as well as holding the position of coordinator of physics experiments at the U-70 proton synchrotron where the incident occurred. Anatoli Bugorsky hadn’t spoken about it for over a decade and only talked about it after the Hernobyl disaster. This was because the Soviet Union at that time did not allow disclosure of its nuclear secrets.

Also see: What Is the Smallest Thing in the Universe?

But what’s even more unique is that Anatoli Bugorsky not only survived the proton beam but also outlived the proton accelerator. Then, the breakup of the Soviet Union and the changing economy of the country made the state treasury and funds empty, and finally the project was stopped and abandoned. At that time, Bugorsky was still living in Protvino.

How to Zip Files on Mac OS

Has anyone ever asked about how to zip files on Mac OS X? This will be our review on this...

How To Uninstall Programs On Windows 8, Uninstalling Modern Apps

Are you a Windows 8 user? Do you want to uninstall the application because you want to get more space...

Google mail is the most popular email service in America. However, if you find out how to delete your Gmail...

How To Delete Messages On iPhone or iPad (iMessages)

How do I delete messages on an iPhone? Are you an iPhone or iPad user. If so, you must know...

How To Manage Storage On iPhone With Easy, You Have to Know

Having a smartphone is certainly very encouraging. However, it is even more exciting if your smartphone has a large storage...