Dark soy sauce is a very popular sauce in Chinese cuisine, as the name implies, it is a dark soy sauce that helps a lot in adding flavor to the dish.

Dark soy sauce is darker, sweeter, thicker than soy sauce. The purpose of this dark soy sauce is to give the dish an umami taste and color. Usually used in dishes such as noodles, or fried rice. Adding Dark soy sauce makes the fried rice and instant noodles taste better and more delicious. (See too: The Dangers of Instant Noodles: 10 Side Effects )

When you don’t have Dark soy sauce, you can use a light soy sauce in your cooking and this will give it a similar aroma and taste to black soy sauce.

Tip: Alternatively, you can add a few drops of molasses in your light soy. The addition of this molasses will balance the saltiness provided by the light black soy sauce. 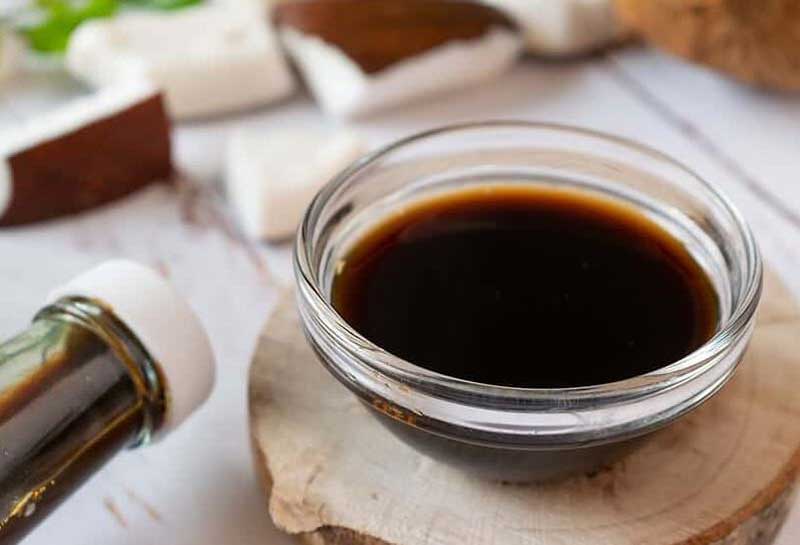 Besides light soy sauce, there is teriyaki sauce as the best substitute for dark soy sauce. This soy sauce has a similar appearance to dark soy sauce, perfectly dark, shiny, and very suitable to be added to your stir fry. The color of your stir-fry will also look attractive and delicious on the tongue. It tastes salty, sweet and comparable to dark soy sauce, making it the best Dark Soy Sauce Substitutes. Suitable for adding to marinades, condiments and ingredients.

Soy sauce is the main ingredient in teriyaki sauce, but there are also additives such as garlic and ginger. In some dishes that use soy black soy sauce, adding teriyaki sauce can give your dish more color. However, the end result of your dish will still not be 100% the same as food that uses Dark Soy Sauce.

See too: 6 Best Substitutes for Beef Broth, Worth Trying

Oyster sauce is great for adding umami flavor to many dishes, not only increase taste in mussels or clams but also in dishes such as chicken, tofu, beef, and duck dishes.

However, replacing dark soy with oyster sauce will give a little oyster flavor and have a caramelized effect on your cooking. You can add oyster sauce in dishes such as spicy sichuan, kung pao shrimp, or in meat and broccoli dishes.

Double black soy sauce is dark, sweeter, and thicker soy sauce. Unlike soy sauce which is very light in texture. This viscosity is due to the addition of extra molasses.

Double black soy sauce is more suitable and more similar, but this soy sauce is also a rare one and most western kitchens don’t have it. That’s why we mention it below.

Hoisin sauce is a sauce that is usually used in cooking Peking duck in Asian cuisine. It goes well with dark soy sauce for some dishes. Hoisin sauce is the perfect marinade for meat dishes such as chicken, duck, beef and others. It has a rich sweet taste, as well as a salty mixture, adding it to the stir fry will make the stir fry taste perfect.

If you want to make your recipe the same as the original, then Hoisin sauce is not the best choice, because there are many additional ingredients in it, such as additional sesame, chili and garlic.

The taste of Worcestershire sauce is a mixture of salty and savory, and tangy. It’s perfect for enhancing the umami flavor of not only Asian dishes, but also great for adding to burger buns, Italian sauces, or to marinades.

However, worcestershire sauce is different from Dark Soy Sauce in that it doesn’t have the same sweet taste, and has a more fluid consistency.

Another best substitute for Dark soy sauce that you can try, this is Mushroom flavored dark soy. Using mushroom-flavored black soy sauce will certainly give a delicious mushroom taste to your cooking. To make a meal after a recipe that uses Dark Soy Sauce, of course it will not be exactly the same, this is suitable if you don’t care about a 100% similar taste. Added dishes will usually add a rich taste and add deliciousness to the dish.

See too: Is Mushroom Good for Weight Loss

Similarly, if you add Mushroom flavored dark soy in a Dark Soy Sauce recipe, it will certainly give you the mushroom flavor you like. Texture and color similar to Dark Soy and certainly suitable for your savory dishes.

This is your challenge, if you don’t have stock for dark soy sauce, you can make your own black soy sauce for your cooking. We will share with you the recipe for making your own soy sauce which is suitable to replace dark soy sauce.

Put the water and brown sugar in a saucepan, cook on fire until it boils, stirring occasionally.

When the sugar has dissolved, then stop stirring, let it continue on the heat until it darkens, when it is dark it will look similar to molasses.

Carefully pour in the soy sauce, and stir until the texture is thick like molasses, remove from the stove and store in a dark and airtight container and store in the refrigerator and take when you need.

What is egg wash? It is a beaten egg dissolved in milk and water used for glazing on cakes, what...

Scotch Bonnet Pepper is a kitchen spice commonly used in several dishes. But not all areas exist or can be...

The 9 Best Substitutes for Cardamom for Cooking

Cardamom is an important spice in Indian cooking, whatever Indian recipe you make, you must prepare cardamom or best substitute...

The 5 Best Substitutes for Horseradish

Are you looking for the best horseradish substitute? It's very easy to find, so you don't have to worry if...

7 Best Substitutes of Capers in Your Cooking

Capers are condiments that add flavor to your dish. If you add it to salads, meat, pasta, or fish, it...