Types of Environmental Pollution and Examples

Environmental pollution is something that is dangerous for life, including animals and plants. When the environment is polluted, the life of living things will be disturbed and this has a negative impact on the population of living things.

So, on this occasion, we will try to review environmental pollution, including the definition, types, and examples and methods of overcoming a polluted environment.

Environmental pollution occurs as a change in the environment that is undesirable because these changes have a negative impact on the activities, health and safety of living things.

Environmental pollution occurs because there are pollutants in the environment. Pollutants are foreign substances that exceed normal levels and are in the wrong place and at the wrong time.

The environment naturally has a balanced ecosystem, but with too many pollutants in a certain environment, there will be disturbances in the environment or environmental imbalance. This will have a negative impact on the lives of living things in that environment.

Also read: What is Papaturro Tree

For example, we see a village life where the air feels fresh and comfortable when we breathe, this indicates that the environment is not polluted. However, unlike life in a city with a large population, vehicle fumes are a lot, causing the air to be unhealthy or not fresh. This indicates that life in the city has experienced environmental pollution.

Air pollution is environmental pollution that occurs because of the combustion of vehicle fumes and factory fumes or factory gas. Are as follows:

Carbon monoxide (CO) is the result of incomplete combustion by motor vehicles. If carbon monoxide is inhaled by humans it will be bad for health, this substance will bind in the blood and interfere with oxygen circulation.

Signs of CO gas poisoning are feeling dizzy, nervous breakdowns and even fainting can occur.

It is a gas that results from the respiration of living things, weathering of rocks and organic decay. If CO2 levels increase in the earth’s atmosphere, the earth will experience warming or what is called global warming.

These are compounds that are needed by creatures to produce protein. If this nitrogen oxide reacts with water, an acid compound will occur.

sulfur dioxide (SO2) or sulfur compounds are pollutants that come from factories and which burn sulfur. This includes gas that occurs from the combustion of petroleum and coal. If this gas reacts with water, an acid compound will occur. If there is rain between factory smoke which burns sulfur or coal and oil, there will be acid rain.

CFCs are the materials used to cool air conditioners and refrigerators. CFCs are also used in insect repellent and hair spray. The use of CFCs can also destroy the ozone layer in the atmosphere. So, gradually there will be an erosion of the ozone layer in the atmosphere and the effect of the earth’s ozone layer will experience depletion and there will be a reduction in the earth’s protection from ultraviolet rays or radiation.

Acid rain is rain that occurs when the air is polluted by sulfur trioxide (SO3), sulfur dioxide gas (SO2), nitrogen dioxide (NO2), nitrogen monoxide (NO). Air that contains these substances when it rains, acid rain will occur.

These dangerous compounds dissolve in water so it will fall with the rain and become acid rain which cannot be avoided. Acid rain is not only dangerous for humans but can also cause harm to plants, loss of plant fertility, increase rust in the soil, and even cause damage to buildings. 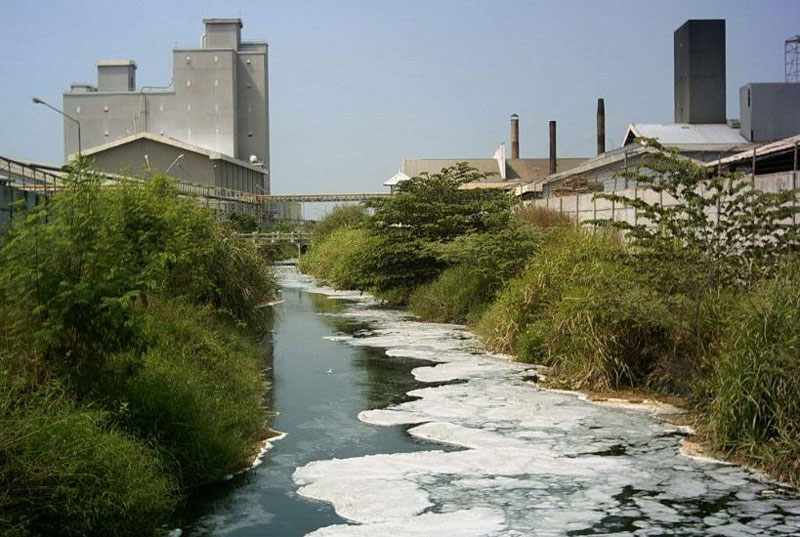 Industrial waste: This waste is water which contains elements of mercury, lead and cadmium. This metal is usually streamed into the sea or into rivers. If drunk by humans it can cause cancer.

Household waste: Household waste can take the form of detergents, garbage, and this can cause the water condition to worsen by reducing the oxygen level in the water.

Agricultural waste: Included among the wastes in the world of agriculture are drugs used to treat plant diseases such as insecticides (DDT) and herbicides. These chemicals are harmful to living things, including humans. This agricultural waste can all cause disturbances in the ecosystem and can kill all aquatic ecosystems including fish. 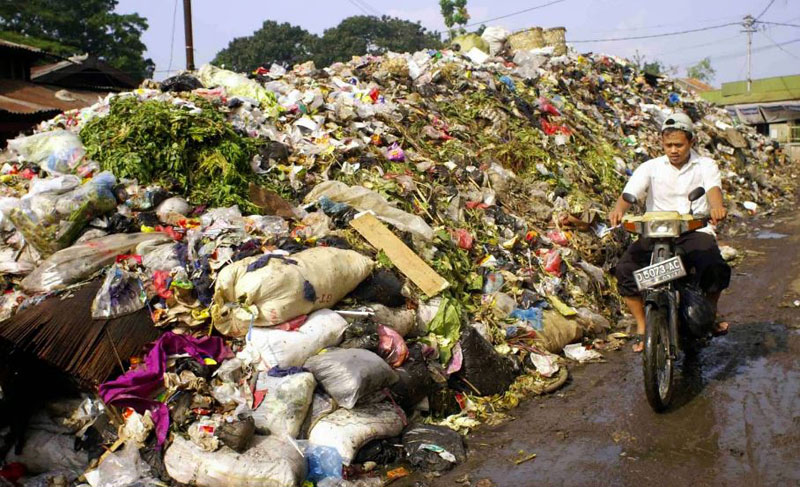 Soil pollution is a change in soil conditions from fertile and natural to soil conditions mixed with non-biodegradable materials such as plastic and cans. So often we hear the phrase “throw the trash in its place”.

If you have ever littered drink cans carelessly, littering plastic waste means that you have a role in making the soil damaged and there is soil pollution or soil pollution.

Environmental pollution in terms of soil pollution can occur due to littering, disposal of liquid waste from hospitals, or from industry. It can also be in the form of oil spills, materials or chemicals on the ground and so on. These pollutants will settle in the soil and will turn the soil into a dangerous place.

Pollution on soil can be divided into two:

Soil degradable pollutants: Wood, paper, leaves or food waste and,
Pollutants that cannot be broken down by soil such as plastics, metals and cans.

How to Overcome Environmental Pollution

Administrative countermeasures are forms of countermeasures that must be done by the government. The trick is to issue regulations in the form of laws that are issued, including the following:

1. The factory must not produce a single product that can endanger the environment or pollute the environment. For example, air conditioning or refrigerator factories may not produce their products that use CFC ingredients that can deplete the ozone layer.

2. Industry must have waste management units, so the waste that is disposed of is in a place and the environment can be protected from danger and pollution.

3. Disposal of garbage from the factory must be located far from residential areas

4. Before creating a factory or industry, the manager must first analyze the possible impacts

5. The government must issue a book on environmental quality which means it can provide information to the public about the state of the environment, this book aims to determine the quality of an environment. So, there are books that discuss air quality, water quality and so on.

You can also make a place to burn garbage with a very high heat level so that it doesn’t produce smoke, in Surabaya there is this place called an incinerator.

Formal education is education that is official and accredited by the government, for example, education that is given to school children about environmental pollution and disposal of garbage in its place, such as through religion and science lessons.

Meanwhile, overcoming environmental pollution through non-formal education is to provide counseling to the community so that they know and understand the environment and its environmental destruction.