In the Qur’an there are four surahs called Quls, because this surah begins with the sentence quls. What are the 4 surahs of Quls? Below we mention one by one complete with meaning and transliteration.

The four suras that start with Quls are:

These four surahs are short chapters and are in the 30th juz of the Quran. Because it is short, it is easy to memorize and it has enormous benefits and virtues in the sight of Allah. Here we mention 4 quls complete with Arabic, translation and literacy.

After mentioning the surah quls one by one, we will also mention the virtues and benefits.

The Four Quls in Quran

Surah Kafirun is a surah which is located at number 109 in the Koran and consists of 6 verses. Here we see the Arabic text, its transliteration and translation.

Bismillaahir Rahmaanir Raheem
In the name of Allah, Most Gracious, Most Merciful.

2. Laaa a’budu maa t’abuduun
2. I worship not that which ye worship,

3. Wa laaa antum ‘aabiduuna maaa a’bud
3. Nor will ye worship that which I worship.

4. Wa laaa ana ‘abidum maa ‘abattum
4. And I will not worship that which ye have been wont to worship,

5. Wa laaa antum ‘aabidoona maaa a’bud
5. Nor will ye worship that which I worship.

The surah that starts with the next quls is surah al-Ikhlas, al-Ikhlas is the 112th surah in the Qur’an. Al-Ikhlas means “Fidelity” or “Sincerity”. This Surah only has 4 verses, which is shorter than Surah Kafirun. So, easy to memorize, make sure you memorize it well.

Bismillaahir Rahmaanir Raheem
In the name of Allah, Most Gracious, Most Merciful.

3. Lam yalid wa lam yoolad
3. He begetteth not, nor is He begotten;

4.Wa lam yakul-lahoo kufuwan ahad
4. And there is none like unto Him.

3. The 3 Quls in Quran is Surah Al Falaq

The third surah quls in the al-Quran is the surah Falaq, this is the second last surah in the al-quran or before the surah An-Nas. One of the benefits and virtues of reciting Surah al-Falaq is to get Allah’s protection from Shaitan. Surah al-Falaq consists of 5 verses. Also includes a short surah but has a great virtue in the sight of Allah.

Bismillaahir Rahmaanir Raheem
In the name of Allah, Most Gracious, Most Merciful

1. Qul a’oozu bi rabbil-falaq
1. Say: I seek refuge with the Lord of the Dawn

2. Min sharri maa khalaq
2. From the mischief of created things;

3. Wa min sharri ghaasiqin izaa waqab
3. From the mischief of Darkness as it overspreads;

4. Wa min sharrin-naffaa-saati fil ‘uqad
4. From the mischief of those who practice secret arts;

5. Wa min sharri haasidin izaa hasad
5. And from the mischief of the envious one as he practices envy 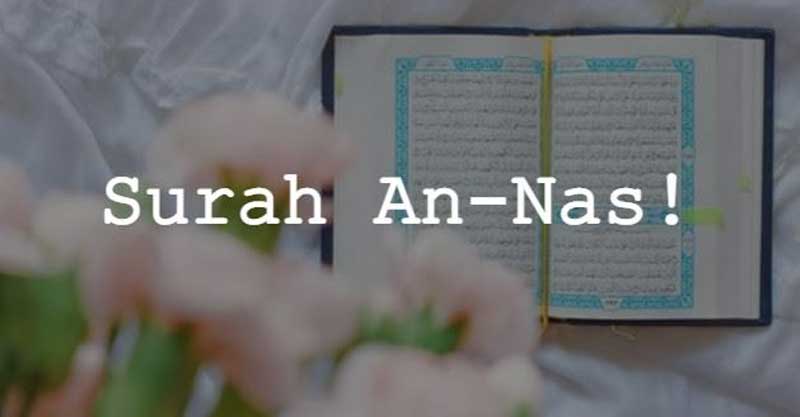 There is one more Surah Quls in the Quran, of which four are Surah An-Nas. This Surah is also a short Surah but is full of benefits and virtues. Surah an-Nas is a surah that begins with the sentence “qul” as some previous suras. This is the last surah in the Quran. Short, easy to memorize and has a lot of grandeur!

This surah contains protection from the shaitan from the men group or jinn.

Bismillaahir Rahmaanir Raheem
In the name of Allah, Most Gracious, Most Merciful

1. Qul a’oozu birabbin naas
1.Say: I seek refuge with the Lord and Cherisher of Mankind,

4. Min sharril waswaasil khannaas
4. From the mischief of the Whisperer (of Evil), who withdraws (after his whisper)

The Benefits of Four Quls in Quran According to Hadith

While two more surahs, namely: al-Falaq and an-Nas are protection from the jinn, black magic, and the whispers of the shaitan.

Hadith on Surah Ikhlas and Kafirun

The Prophet (ﷺ) said to his companions (shahabah), “Is it difficult for any of you to recite one third of the Qur’an in one night?” This suggestion was difficult for them so they said, “Who among us has the power to do so, O Allah’s Messenger (ﷺ)?” Allah Apostle replied: “Allah (the) One, the Self-Sufficient Master Whom all creatures need.’ (Surat Al-Ikhlas 112.1 – to the End) is equal to one third of the Qur’an.” (Reference: Sahih Al-Bukhari 5015).

Hadith On Surah Nas and Falaq

As narrated by Sayyidah Aisha, she said: The Messenger of Allah, PBUH, would get ready for sleep, he would blow into his hands, recite the two chapters of refuge (sura al-falaq and surah an-nas), and he would wipe his hands over his body. Source: Sahih Bukhari 5960 Grade: Sahih (authentic).

Whenever Allah’s Messenger (pbuh) became sick, he would recite this Mu’awwidhatain (two surahs of protection) (Surat Al-Falaq and Surat An-Nas) and then blow his breath over his body. When he became seriously ill, I used to recite (these two Surahs) and rub his hands over his body hoping for its blessings. Reference: Sahih al-Bukhari 5016 In-book reference: Book 66, Hadith 38.