Soon we will be harvesting a lot of Zucchini and now the most important thing is knowing how to freeze Zucchini easily. Our friend said that the zucchini would not be eaten in one time if the harvest was plentiful. So the alternative to storing zucchini is to freeze them. Freezing Zucchini is the easiest and fastest way to preserve it.

So, this method of preserving zucchini by freezing is important to know so that a bountiful harvest will last a long time. If you also grow zucchini and harvest them in large quantities immediately, don’t forget to follow our method. We will share with you how to freeze Zucchini easily and quickly.

We think that zucchini is a very useful pumpkin-like vegetable. This is a versatile food that you should grow. You can use this vegetable as an addition to bread, muffins, or in a lasagna dish. Even those who use zucchini as a food you add in vegan cheesecakes.

Ok, now let’s see step by step to freeze Zucchini. We found many people researching how to freeze zucchini without blanching on the internet. So, we follow to help those of you who don’t know how. As a Zucchini grower, we have a lot of experience with this vegetable. One of them is how to store it so that it lasts longer. Once harvested, you have plenty of zucchini, and the way to keep them is to freeze them.

How Do You Freeze Fresh Zucchini?

Zucchini is a delicious and nutrient-rich food and one way to store zucchini for a long time is to freeze it. Freezing zucchini is to preserve it so it doesn’t go bad and can be fresh whenever you use it as food.

Well, how to freeze zucchini? To freeze fresh zucchini you should first cut it into small cubes (to freeze cooked zucchini will explained in the last article). We like to cut the zucchini lengthwise and then, we cut this lengthwise into smaller pieces. It is makes it easy for you to cut it and get small pieces of zucchini of uniform size. 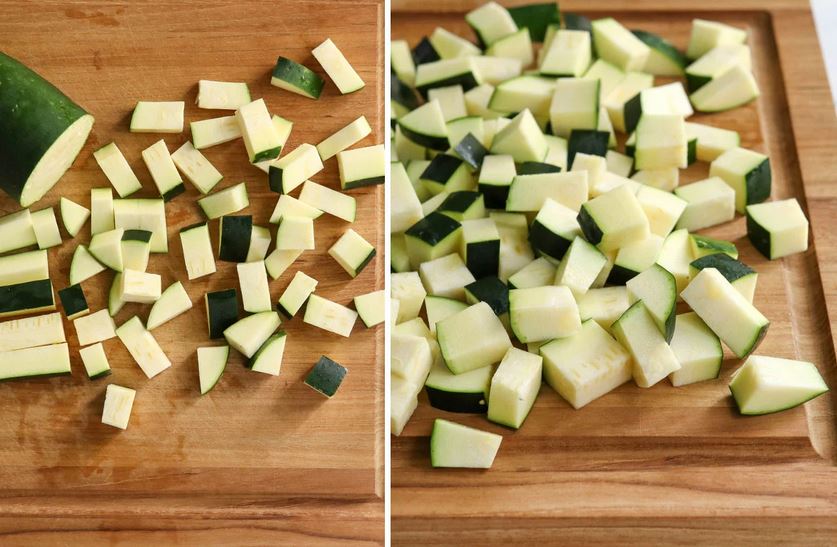 Now take the zucchini that you cut earlier, place it on a baking sheet that has been lined with parchment paper. Using parchment paper is important so that your zucchini doesn’t stick. 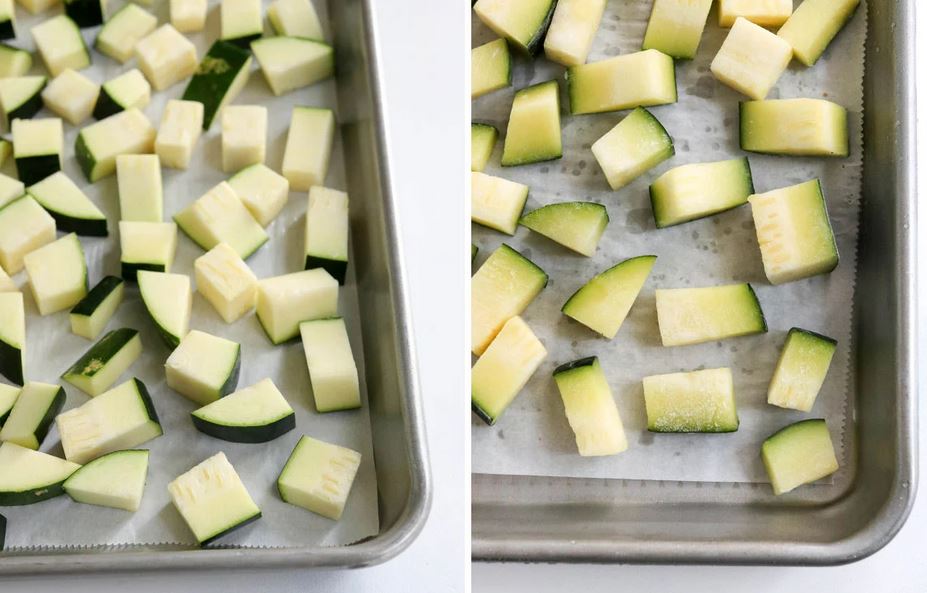 Then put it in the freezer and freeze it for an hour. Now you can transfer it to another airtight container or plastic container equipped with a sealing feature. 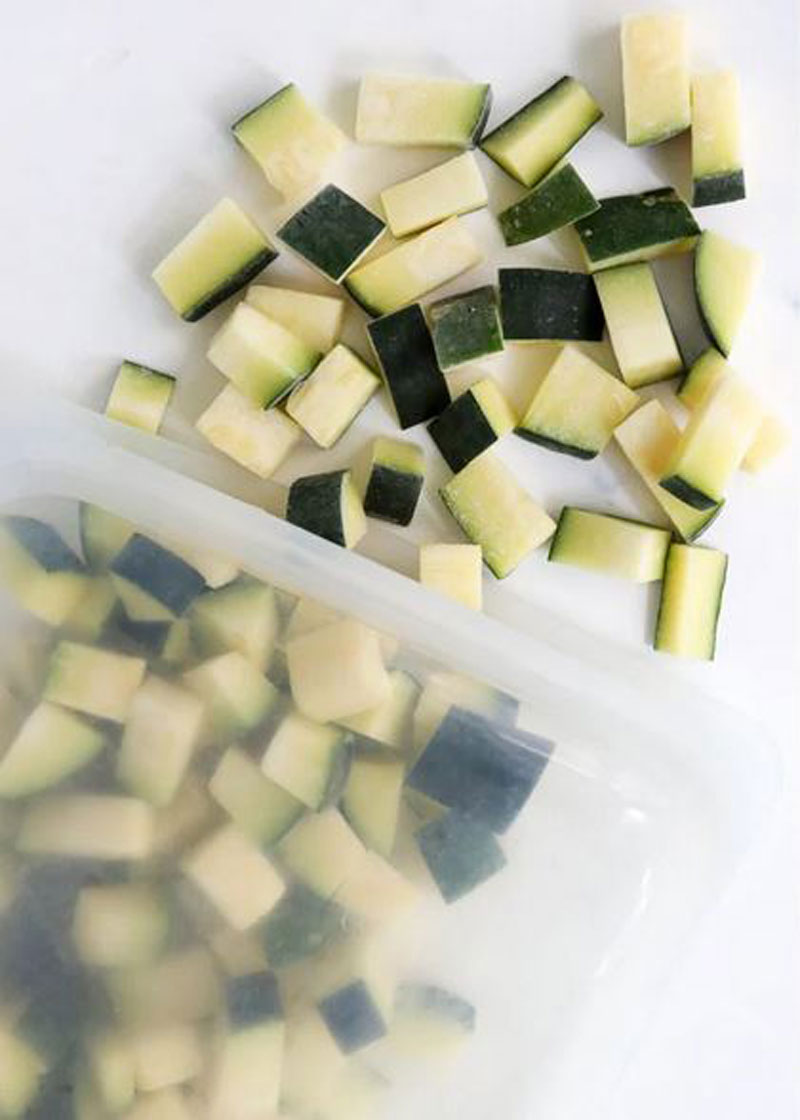 Freeze until the zucchini are rock-hard. This is the easiest way for you to store zucchini for a long time, even months.

Can You Freeze Zucchini Without Blanching?

A question often asked by those who have a lot of zucchini and want to preserve it by freezing it. It was “how to  freeze zucchini without blanching”. This is what we will answer now.

Actually freezing vegetables does not require blanching because this is a process of deactivating enzymes. This will usually cause discoloration of the vegetables and make them no longer fresh.

So, you can freeze zucchini without blanching it as well, you should freeze it immediately without the blanching the veg. Fresh vegetables are crispier than frozen vegetables that you have thawed. If you blanch the zucchini, of course you’ll find the zucchini is mushy when you thaw it.

It’s also important to understand that frozen zucchini is almost colorless and loses its flavor, especially when you add zucchini to your smoothie recipe. So, if you blanch, when you add it to your smoothie, it’s like you’re adding a lump of ice, not has the taste, but you still get some vitamins in it.

So, can you freeze zucchini without blanching it? The answer is “yes you can”.

Where Can You Use Frozen Zucchini?

Those are some ideas for using zucchini that you have frozen. But it’s not limited to just a few recipes, you can add it in many foods as you add fresh zucchini.

So, that’s how to freeze zucchini easily and quickly and you can use it in many of your favorite recipes. Just cut into small pieces and then place on a baking sheet that has been lined with parchment paper. Once frozen or hardened, you can transfer them to a freezer-safe bag and store them in the freezer for up to several months.

So, for those of you who want to freeze zucchini, this is very easy for you to do. We recommend that you freeze zucchini without blanching to make it fresher and crispier.

Add zucchini to your favorite recipe

Zucchini is a great addition to many dishes. For a better taste of zucchini, you should try adding it in a zucchini recipe along with other vegetables, or adding it in another recipe. Frozen zucchini are sometimes less flavorful or less intense when cooked separately. So, adding it in other dishes is an alternative to consider.

Zucchini can be used as an additional vegetable in various dishes, not only as a side dish, but also as an addition to other dishes, frozen zucchini texture will not be as crispy as fresh zucchini.

The addition of frozen zucchini is best in another recipe as an add-on. Don’t add it to the main zucchini recipe because it will be more mushy when it’s thawed.

You can add frozen zucchini for recipes that don’t use zucchini as the main ingredient. For example in curries, soups, and frozen smoothies.

Zucchini is a nutrient-dense vegetable, in 1/2 cup providing a variety of nutrients. Below is a nutritional list for 1/2 cup frozen zucchini. But this is only an estimate, and you can use it as a reference for daily consumption.

How to Freeze Shredded Zucchini? 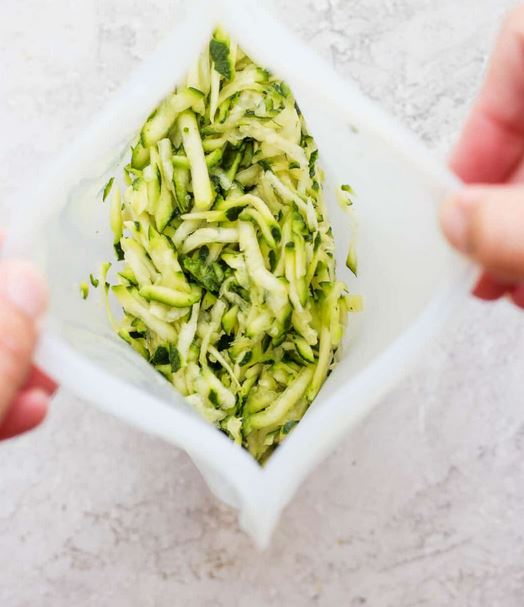 – Cut off the ends or stems of the zucchini, then grate with a traditional grater or using a blender, do as much as you want.

– Then place the shredded on the cheese cloth, you can also use a paper towel, but this is less efficient.

– Squeeze as much water in the zucchini as you can

– Then put it in a freezer safe storage bag, use a seal bag to make it easier for you to open it. Store for 4 months.

– We recommend that you write down how much you freeze, note the amount so that it is easier for you to take it later.

If you want, you can also store this shredded in a jar.

Can You Freeze Whole Zucchini?

The method is easier because you don’t need to cut it into small pieces. Take the whole zucchini and wash it, then you put it in a freezer bag and store your zucchini there for a few months.

How to Freeze Cooked Zucchini

– Before freezing it, let it sit for a while until the zucchini is cold

– Then place the zucchini in a freezer-resistant plastic bag, using a sealing bag.

– Drain all the air in the bag, then seal the bag until it is completely closed

– Put the bag of cooked zucchini in the freezer

Tip: When you defrost to eat, you can saute, steam. We prefer to saute it with a little olive oil.

How to Enjoy this Holiday Season with Your Friends?

The holiday season is when you can get together with those who mean the most to you and enjoy the...

How Long Does Celery Last in the Fridge

Want to store celery in fridge and don't know how long last? Celery is a cooking vegetable that naturally gives...

How to Measure Your Ring Size at Home

How to Measure Your Ring Size - Measuring what your ring size is is an important business so you can...

How to Make Lentils Flour [Step by Step]

How to make lentil flour is very easy, just by using a food processor or coffee processor you can make...

If you are overwhelmed by cleaning granite due to stains and dirt from various materials, you do not worry because...