Goa Gajah Bali (Elephant Cave Entrance Fee) is a cave that has beauty and uniqueness. Now one of the most attractive tourist destinations in Bali, let's find out more about this Bali Cave

Goa Gajah Bali – Indonesia is an archipelagic country that provides a lot of natural beauty, especially in the open, such as beaches, waterfalls, underwater tourism, etc., should make Indonesia one of the leading countries in the supply of tourist attractions. If supported by good and correct management, it is possible that this green country on the equator will become a world tourist destination. Thousands of islands in Indonesia certainly provide many coastal, marine, and even the highest mountain tourist destinations.

However, why is Indonesia still not very successful in terms of tourism? One of the causes is an improper management system such as extortion and various disturbing actions that make it cured and even tarnish the good name of the Indonesian nation.

Not only that, the management side, which is mostly left to the private sector, makes it impossible for the government to do much towards the community. Supposedly, the results of tourism which are managed by the government can be used for various things that benefit the people, even the government can reduce ticket prices so that they do not overlook the people. However, when all of this is given up to the private sector, one of the difficulties is the soaring ticket prices. People finally have to enjoy the natural beauty of their own country at such a heavy ticket price. 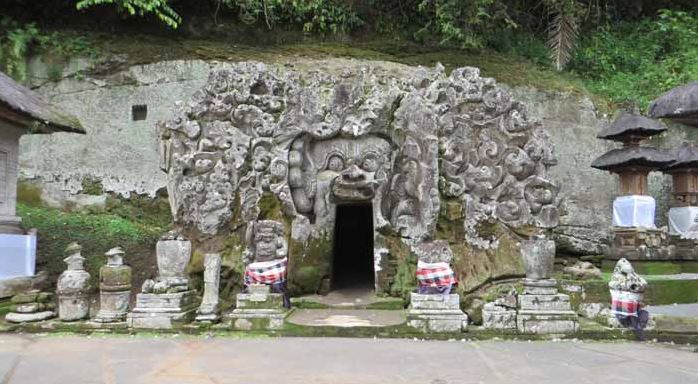 One of the countries with the most beautiful and most tourist destinations is Indonesia and among the many areas that have natural beauty is Bali. Indeed, Bali has long been known as a city of tourism because of its undeniable natural beauty. But make no mistake, Bali is not only with tourist destinations such as Kuta beaches, Tanah Lot and Sanur but Bali has many other beautiful places that are no less interesting to visit.

One of the tourist attractions is Goa Gajah Bali. If you have never heard of this cave, follow this article because we will explain at length about Goa Gajah Bali starting from its history, beauty and various facilities and ticket prices to enter the Bali cave.

What is Goa Gajah

Goa Gajah is a place called a temple and is located in Bedulu village, Blahbatu sub-district, Gianyar regency, Bali. Now this elephant temple or cave is one of the tourist destinations that many visitors, both domestic and foreign. its location is still in the Ubud area about 27 km from Denpasar Bali.

Goa Gajah is only 2 meters high and two meters wide. For those who are taller than 2 meters, they have to bend down to get into the elephant cave. On the inside there is a road in the shape of the letter T. This cave was first built in the 11th century AD, so this is not a cave that occurs from natural processes but is made by humans. For those of you who come to Bali, don’t miss to enjoy the uniqueness and history that is presented by this Balinese elephant cave.

In history, elephant caves have been known for a long time in the ancient kingdom. Say the kingdom of Sri Dharmawangsa wardhana Marakata Pangkajastano in 1022 N, the reign of the youngest son in 1053, during the time of Sri Paduka the great teacher in 1324 AD, and others. Its first development was built in the 11th century AD to be precise during the time of King Sri Bendahulu. Furthermore, during the reign of Hayam Wuruk, this cave already existed and was used as a place for the hermitage of San Bidadyaksa. 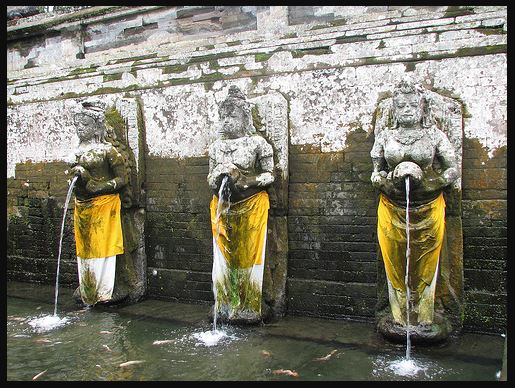 While another version of history states that the elephant cave is also called kunjarakunjapada, which means it is a kunjara hostel. This is Sri agastia hostel located in Mysore South India.

The discovery of Goa Gajah was first discovered by the Dutch East Indies, namely LC Heiting in 1923 who was traveling. then he found the existence of Ganesha statue, trilingga, and hariti statue around it. Furthermore, this discovery was submitted by LC heiting to the Dutch government.

Research on this discovery continued in 1925 by DR.WF Stutterhiem. further research continued in 1950 carried out by the archaeological site of the Indonesian office. Then, several years after that, or to be precise in 1954, several statues of women were found whose chest area came out of water, and this water is considered holy water where people who wash their faces with this water can add to their facial aura.

Here there is also a building in which a historic statue is kept, namely a statue of the goddess Hariti or called Ratu Brayut. This queen of brayut is known in history as the evil queen, but then she got advice from Buddha and eventually became kind and compassionate to the children. This elephant cave found is estimated to have existed in the 11th century AD, this is known from the holy water pool and the statue.

The word “Goa Gajah” originally came from the word Lwa Gajah which came from a language found in the religious books of the State. In the book NegaraKertagama there is a mention of the meaning of Lwa, which is “a river”. Meanwhile, the word “elephant” means a hermitage not a large animal called elephant in English. So, the meaning of Goa Gajah is Goa which is used as a sanctuary on the riverbank. 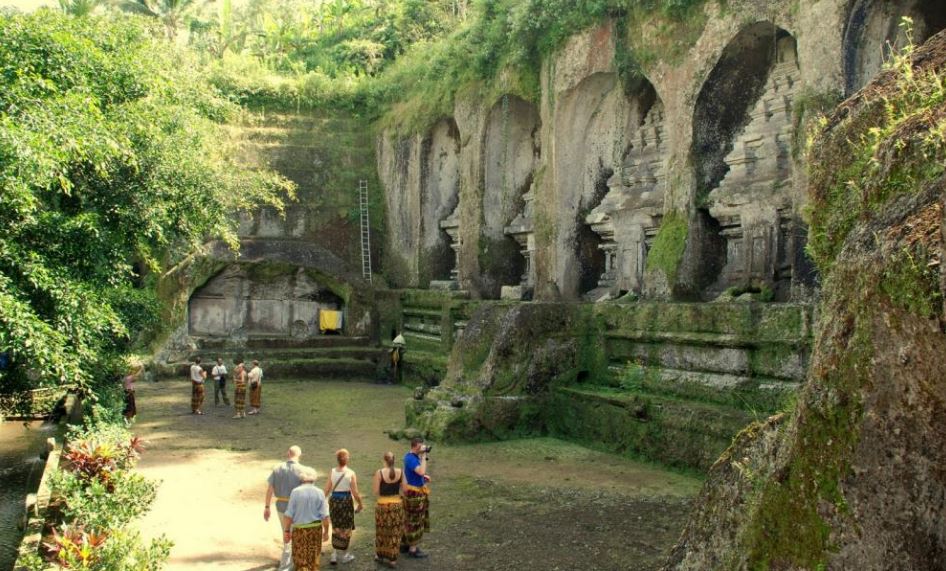 Inside the elephant cave complex you will feel a bath that is thick with Hindu history (shivaism) and you can find several artifacts. One of the artifacts is the Ganesha Statue. This is a statue which is believed by Hindus to be the son of Lord Siva and the goddess Parvati. While the function of Ganesha according to Hindus is as a symbol to reject reinforcements. Ganesha is a statue of a Hindu with the shape of an elephant’s head and human body and has four hands that hold different objects.

You can find several objects in this statue, including broken fangs, an ax-shaped pacifier, a bowl on the trunk. The broken fangs mean the ferocious and giant nature that has been controlled by humans. According to them, this reflects introspection and alertness. Apart from these three objects, you can also see the aksamala which means a continuous chain. This reflects humans who are wise and not arrogant.

Meanwhile, the three phallus in the inside of the elephant cave are a trilingga statue. These three statues reflect that the Hindus adhere to the Tri Murti, namely Brahma, Shiva and Vishnu. The large phallus will be surrounded by 8 small phallus.

Besides the Goa Gajah there are also statues that emit water into the pond and this is usually referred to as water for purification. The purpose of this purification is a ritual of purification which is carried out for 210 days based on the guidelines on the Balinese calendar or every 6 months. This emitted water also has the meaning of water of life and sapta ganga, namely the seven holy water sources based on the Hindu people. These waters are Yamuna, Ganges River, Sindhu, Saraswati, Godavari, Serayu and Narmada.

Around the elephant cave you can also find other statues, namely the statue of Brayut or Ratu Brayu. This Brayut statue symbolizes prosperity because it tells about a person who has quite a lot of children. Meanwhile, another story tells that Ratu Brayut and Dewi Hariti are child predators. However, the habit of preying on this child changed after meeting Buddha.

Not only hindu statues you will find, but there are also buddha statues called buddha amitaba. The patug is made in the typical form of an ascetic. Visitors to the Bali Elephant Cave can see and find out more about the past stories of the Buddhist and Hindu community here. 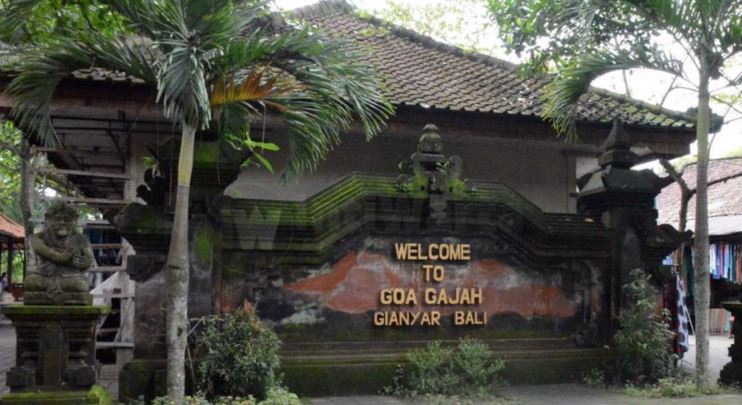 The location of this tourist attraction is in the village of Bedulu Blah Batuh, Ubud, Gianyar Bali. Access to the elephant cave is very easy to reach. If you are in the swing park, you only need to cover a distance of 30 minutes and the distance is about 19 km. However, if you are in Denpasar or the capital city, it will take you longer, which is about 1 hour to get to the elephant cave.

Note: The price of admission can change at any time. Meanwhile, the opening hours are every day from 08.00 to 17.00.

Are you confused about where to go? There are quite a lot of beautiful and even the most beautiful places...

The 8 Things To Do In Dammam, Saudi Arabia

Dammam is a fishing village that later turned into an important commercial port on the Arabian gulf. Located in the...

England Coastal Towns - When you are on vacation to England, you must know where are the best places to...

Many people who live in cold places choose to leave the area for temporary residence in warmer places. This is...