by ubaid
in Seafoods
0 0

Comparison of green mussels vs black mussels, which of the two is more nutritious, easier to get and which is tastier. Shellfish is a seafood dish that many people enjoy, not only delicious but also a world’s healthiest food as long as it is consumed in medium portions.

In this article, we will look at reviews of both types of mussels. So we made the title of this article with green mussels vs black mussels, see the difference between the two and which one do you prefer. 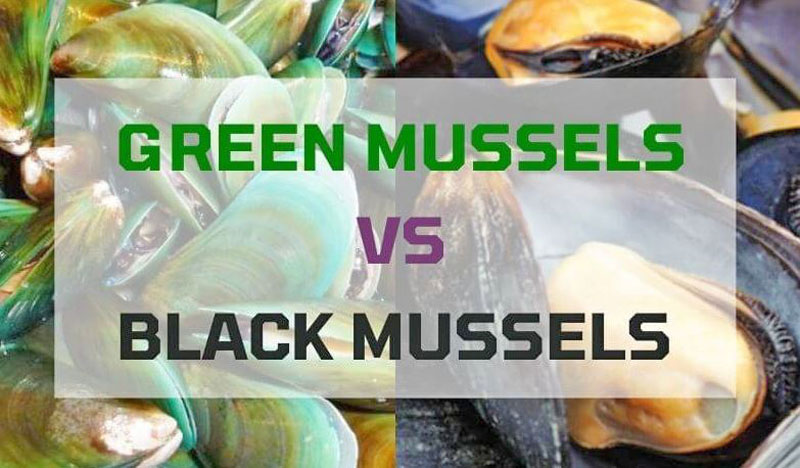 Now most people like seafood, considered as healthy and delicious food. Even for the rich man, seafood, which is generally expensive, is served at every gathering and celebration of a certain day.

Not only sea fish, but shrimp, mussels provide freshness and delicacy on your table. Here will highlight the discussion on one of the seafood, namely mussels. There are two mussels that are the subject of our discussion, both are green mussels and black one.

Indeed, there are other types such as brown and silver mussels. On this occasion, we will only discuss for two mussels.

We will see what is the difference between green mussels vs black mussels. Including its availability, nutrition, delicacy and even the location of its habitat.

Why only green mussels and black scallops will we review, because both are the dominant types of mussels found on the market and are widely sold.

There seems to be some confusion about these two types of mussels. So, it is very important to see where the difference between green and black mussels is.

Ok, but before we discuss further, we have previously discussed about mussels, exactly how do mussels taste like? Please refer to the article.

Before we explain what is the difference between green mussels vs black, let’s first understand what are the mussels? We will look at the definition of mussels first, making it easier for us to understand both in more detail.

Mussels are mollusks or marine animals that live in fresh water or sea water and they use clam shells.

In the world of science, bivalve mollusks are known as seafood which is very popular and most consumed by humans. The reason makes sense, because this type of seafood has a balanced nutritional content.

Mussels are a source of lean protein, in fact there are many other minerals such as zinc, iron, vitamins and other micronutrients. Mussels are also very rich in vitamin B12 which is important in the process of forming red blood cells.

The high protein content in mussels when compared to the number of calories and zero fat content, seems to make mussels, either green mussels or black mussels a food for weight loss diets.

So, it can be said that Mussels is a high protein food for weight loss. But don’t forget to balance it with calorie burning by doing several exercise sessions.

Is Mussels Safe to Eat?

Mussels are aquatic animals that can be contaminated with bacteria and others. If you want to eat mussels, don’t forget to cook them first. Enjoy a delicious dish of mussels after you cook.

Cooked mussels are safe to eat, and cooking mussels must know how because it is included in filter feeders. They filter plankton in the water as it passes through them, sometimes they also excrete certain bacteria and toxins. So the safest way to eat mussels is to cook it properly.

Wild mussels that inhabit the bottom of the sea or rivers are considered bottom feeders. So these aquatic animals are considered as animals that are susceptible to contamination with various wastes.

Now, after the mussels are cooked, all the harmful ingredients will be destroyed. So, again, the safest way to eat mussels is to cook them.

Unlike the case with cultivate mussels, they are cared for on the seabed and well cared for, so it is rare for them to be contaminated with waste.

So, if you want to enjoy mussels in a restaurant, you should ask the chef whether mussels are caught wild in the sea or mussels cultivated by farmers. If the results of farmers’ cultivation, you are already at the first safe point.

What Are Green Mussels? 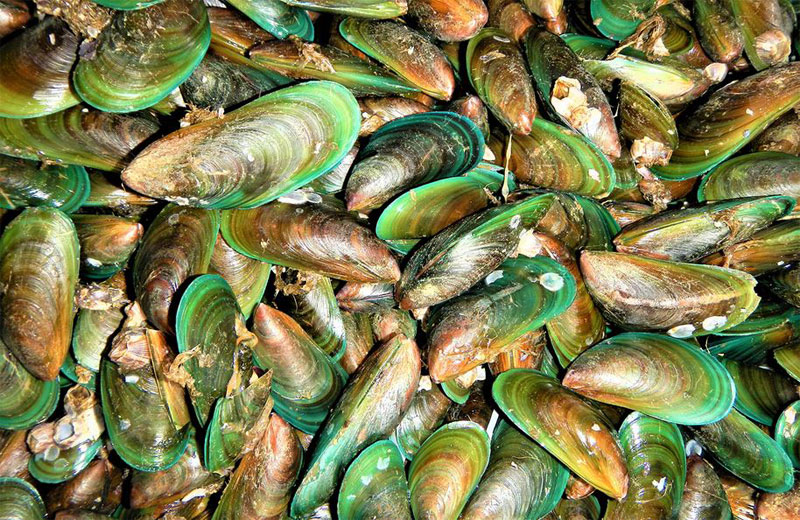 Green mussels are mussels from New Zealand and are exported to various countries in the world. Indeed, now several other countries have started cultivating green mussles, but it is still in small quantities. Unlike New Zealand, this is the original habitat of this type of mussels.

Well, because green mussels come from New Zealand, of course the supply in the market is limited and cannot be found as easily as finding black mussels.

Green mussels are shells that are kept strictly with certain regulations to keep them safe and of good quality. Among the important things to consider in cultivating green mussels is the quality of the water.

So, all green mussels produced in New Zealand waters are high quality mussels. So, do not be surprised if this seafood is sold at high prices.

However, in terms of taste, the green one has light taste when compared to the black one. Black mussels are stronger in taste than other mussels.

What Are Black Mussels? 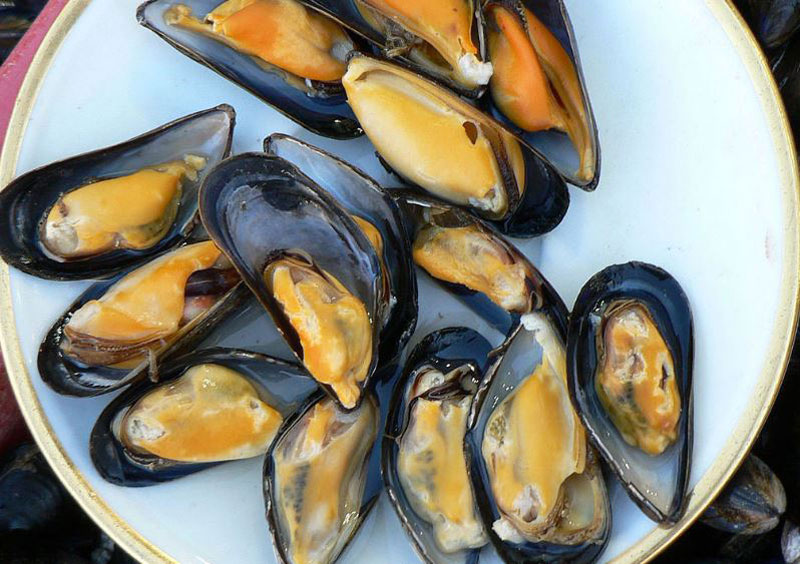 Black mussels are also popularly known as blue mussels. The darker color actually comes from blue, so when the color is very dark, it is called black mussels.

However, the color of black mussels depends on where they live or depend on. In a protected place, the black mussels farmers use ropes, the mussels are then attached to the ropes and they wait for food. They wait for the plankton to pass and filter it as food.

In fact, because of the large number of mussels consumers in America and other parts of the world. Several countries such as America, Canada, South Africa and China have done significant cultivation of mussels.

So, if we compare green mussels vs black mussels, it is the black type that is widely cultivated freely in nature and its availability is also quite large.

The Comparison of Green Mussels with Black Mussels

Actually, talking about which is more delicious between the two, can’t be separated from your appetite and the way of cooking or the spices used.

So, there is no strong difference between the two, there is only your own appetite and the use of the best spices.

Green mussels are a type of shellfish that are cultivated in clean waters and rarely exist naturally in the wild. So, this type is healthier and protected from bacteria. If you’ve never tried it, maybe this is your chance to experience what green mussels really taste like.

The location is on the coast of New Zealand, where they are cultivated by professional farmers. Here is a place of nutrition and is where most of the world’s mussels are kept.

Cultivation of mussels on the coast of New Zealand has been done for a long time, this was around the 1960s. Green mussels has now become part of the typical food of the Maori people, they have made green mussels as food for hundreds of years.

The size of green mussels can reach 15 cm or about 6 inches, but the size that is widely harvested and used as seafood in restaurants is 7 to 8 cm.

In terms of taste, green mussels are still less tasty than black mussels which are said to be very tasty and close to the taste of mushrooms.

The green mussel variety is a very plump and fuller variety than other types of mussels. The meat is denser, tougher but less flavorful or less savory.

This is influenced by cultivation procedures at the place of origin, besides that green mussels also experience a lot of demand, even though their availability is low.

This species is rarer and the largest cultivated area is only in New Zealand, and most green mussels in other countries are imported from New Zealand.

So, green varieties are rarer than green mussels.

Unlike the case with black mussels where its abundant availability makes most of the earth’s population experience its delicacy.

Black mussels are the most commonly found in stores or restaurants around the world.

Black mussels are widely cultivated in the world in various ways. South Africa has one of the largest black mussel farming industries in the world.

The cultivation of Choromytilus meridionalis is native to this African country.

While Bulgaria, this is also the country with the largest cultivation of black mussels in Europe.

In addition, there are other varieties of black mussels that are cultivated in several developed countries such as Japan, Russia and North Korea.

The size is smaller than green mussels, usually harvested with a size of 4 – 7 cm.

The texture of black mussels is softer, softer and if you chew it, it will crumble. The size of the meat is smaller and more quickly destroyed when chewed.

Black mussels have more affordability because they are cultivated globally in several countries. Unlike the case with green mussels which are only cultivated in New Zealand. Although now it has begun to be cultivated in India, it is still in small capacity.

This also affects the price, where the price of black mussels is cheaper than green mussels.

Because its cultivation is large and worldwide, its availability is also large, it can even be found all over the world, especially frozen.

Green Mussels vs Black Mussels: Which do you think is the best?

These factors have limited the price and availability of green mussels. It seems, New Zealand made a bigger cultivation place there.

Our hope: In the future, it is hoped that other countries can also produce green mussels so that the demand for the earth’s population is overcome. This is also an extraordinary business field for those who want to try it.

However, that doesn’t mean black mussels aren’t delicious. Even in some recipes of the world, black mussels is a popular and loved food.

The easy cultivation of black mussels has opened up many farms for mussels around the world. Until whenever, green mussels and black mussels will be seafood that many enjoy.

Banana Flower: How to Use It In Cooking