Human digestive system – Food enters the body through the mouth, esophagus and other organs until it reaches its ultimate goal of being a source of nutrition or becoming waste products that will be excreted through the anus. Based on a study, it is stated that the human digestive system has a size of 30 feet when measured from the mouth to the anus.

What is the Human Digestive System?

The digestive system in humans is a system that is a means of processing and processing food and drinks from the mouth to digestion and processing it in such a way that the food can be utilized by the internal body to take its nutrients and the rest is disposed of as feces.

From the other side, the digestive system is the process of changing food and taking food nutrients by the body with the help of enzymes that help breakdown these foods so that food becomes simpler and can be used as a source of nutrients needed by the human body.

The human digestive system consists of:

Also see: How to Reduce a Distended Stomach with a Diet

The main parts or organs that affect human digestion are:

These 6 organs are parts of the body that are very influential on the digestion of food. Here we see the explanation one by one.

The mouth is the first and top organ in the digestive system, all food and drink to get to the stomach, of course, must pass through the mouth first and then continue to other digestive organs.

Another part that is quite important in the mouth is the teeth, the function of the teeth is to chew food so that the food becomes smooth and easy to digest in the next part of the digestion. There is also saliva or saliva, this is a very important part too, the function of saliva is to keep the oral cavity clean and free from bacteria besides that it also functions to make it easier for food to be swallowed. 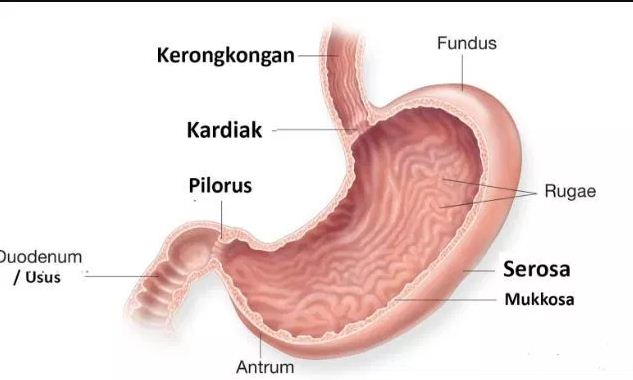 The stomach is divided into three parts and its existence is very important in the digestive system. One of the functions of the stomach is to produce hydrochloric acid which is useful for killing bad microorganisms in the food we consume.

So how does it work? This small intestine works by several processes such as producing enzymes that are useful for converting certain substances to be utilized by the body.

The rectum or anus is the end of the large intestine, this is the last part of the digestive system where the stool will pass through to be disposed of as waste.

Process of Digestion of Food in Humans

The digestive process in humans is the same as what we discussed above, starting from the mouth organ, ending at the anus. To be clearer, here we look at the order of the digestive system processes in humans.

This digestive process can be clear like this: food first enters the mouth and is chewed until it is smooth so that it is easily digested and then enters the stomach through the esophagus. When the food is in the stomach, a chemical digestion process will occur, where the food is digested with enzymes produced in the stomach.

This stool will be passed into the rectum, and if the feces (feces) are full it will be removed through the anxs.

27 Interesting Facts About the Internet [Amazing]