This time we will try to see what is inside the Kaaba. Kaaba is a sacred building which is an important building in Islam. Everyone wants to be able to surround this Kaaba building and be one of Allah’s guests to be able to be present at the Haram Mosque, Mecca. The Kaaba is a building in the middle of the Haram Mosque which is the central point of the Qibla of Muslims when praying. Many people are given the opportunity by Allah to be able to perform the pilgrimage or Umrah, but only a few are given by Allah the opportunity to enter the Kaaba (baitullah).

So, on this occasion we will try to look inside the Kaaba, what is in the Kaaba? For that, let’s keep reading this article to the end.

What Is Inside The Holy Kaaba 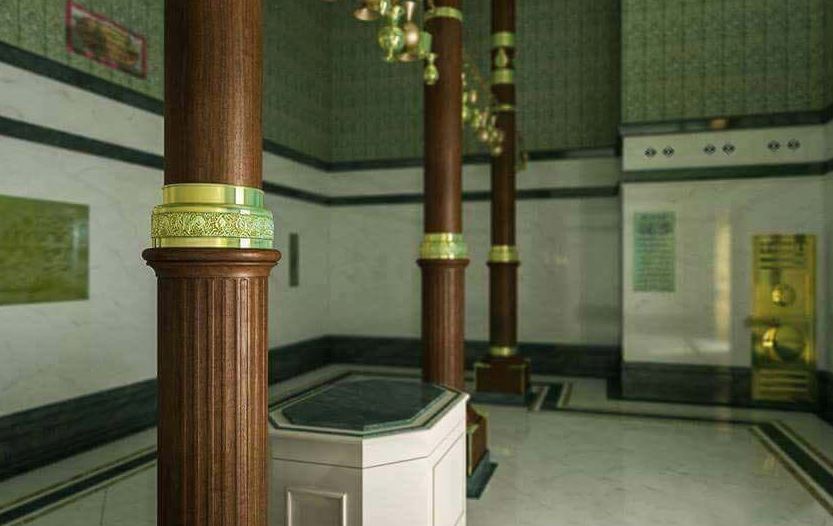 The Kaaba is a sacred building built by Prophet Ibrahim AS. with his son the prophet Ismail AS. A building that was built because of the command of Allah SWT, and is now a mecca for Muslims around the world. All Muslims who pray, of course he must face his face towards the Kaaba. So, this is a sacred building and someday, when no one is doing Tawaf in the Kaaba, Allah will lift this Kaaba and disappear from the surface of the earth. Hopefully we can be one of the servants of Allah who can perform Hajj and Umrah.

The Kaaba building has undergone several changes since it was founded by Prophet Ibrahim AS. Now the outer structure and part of the Kaaba is something extraordinary. The last time, the Kaaba underwent changes in the 1950s, where the aim was to accommodate the extraordinary number of pilgrims who came. At that time, the Saudi Arabian government extended the boundaries of the mosque and now it is spread over 40 hectares of land.

Kaaba is a cube-shaped building with a height of 15 meters and the corners are designed parallel to the cardinal directions. Then in 1982, the door of the Kaaba was beautified by using pure gold. The Kaaba is covered with a black Kiswah cloth made of silk. Initially the Kiswah Kaaba came from Egypt with caravans that came to make Pilgrimages and perform the Umrah. Now the piece of black cloth has been produced by Saudi Arabia itself. The black silk kiswah cloth is knitted in Arabic calligraphy with gold thread. This kiswa is replaced every year, or rather on the second day of each month of Hajj.

What is The Important of Kaaba

Kaaba is a sacred building for Muslims which is also known as Baitullah (house of Allah). Actually, this is not the real house as we understand the meaning of our house or A’s house and so on. However, the house of Allah here has a broad meaning, this is the place where all faces and hearts are turned when he does prayer (worshipping Allah the almighty). All Muslims in all parts of the world, it is obligatory for him to face the Kaaba when performing the obligatory prayers 5 times a day and night.

Also see: The History of Zamzam Water Well in Mecca

But before the birth of the Prophet Muhammad, the Ka’bah became a place of placement of idols by the polytheists of Mecca. However, after the birth of Rasulullah SAW, he cleaned the Ka’bah of idols and this shows that the Ka’bah is a place for Muslims to worship one God, namely Allah SWT, there should be no idols around it let alone in it.

The Kaaba and the Black Stone (the black stone in the corner of the Kaaba) are witnesses for all Muslims who perform the pilgrimage. This is a symbol of the unification of Muslims in various corners of the earth. They do not worship the Kaaba or the black stone, but all worship Allah the almighty, facing the Ka’bah is only a form of unification of the Islamic ummah at one point which signals that only one God must be worshiped, namely Allah SWT.

What is Inside The Kaaba?

What exactly is in the Kaaba. The Kaaba is a cube building with black stones (hajar aswad = stone from heaven) hanging in the corner of the Kaaba and the Kaaba is in the middle of the Grand Mosque. The Black Stone is believed to be a stone that was sent down from heaven at the time of the Prophet Adam AS and Eve.

Prophet Muhammad SAW even kissed the black stone often, so now it is followed by Muslims. The stone of Hajar Aswad will bear witness on the Day of Judgment to those who have performed the Hajj and those who have not. Sayyidina Umar ibn Khattab once kissed the black stone because he saw the Prophet Muhammad kissing it. It is a joy for us when we can kiss this stone of Hajar Aswad because it is a stone that the Prophet SAW kissed quite often.

See more: The Genealogy of the Prophet Muhammad PBUH to Adam As.

Inside of the Kaaba: Area and Structure

The inside of the Kaaba is 180 square meters in size, in which there are three columns that support the ceiling of the Kaaba. One column is 1350 years old. Past each column there is a pillar that is used to hang gifts. The three pillars in the Kaaba were built by Abdullah bin Zubair. Abdullah bin Zubair is a Muslim leader whose role is important for Islam and is one of the companions who recorded the Koran. Inside the Kaaba there is also a closed staircase that leads to the hatch. At the door there is a silk curtain with gold and silver sizes covering the door of the Kaaba.

The Kaaba actually does not have a roof, but then the Quraysh built the roof of the Kaaba. Also, close the western door.

The floor of the Kaaba is made of marble and the walls are also covered with marble of various colors. There is also a red silk curtain covering the interior of the Kaaba. Inside the Kaaba there are also eight stones inscribed with Arabic calligraphy. Inside the Kaaba there is also a special sign made to indicate that the Prophet SAW was standing there to pray to Allah. So, many Saudis who entered the Kaaba, they stood at the feet of the Prophet Muhammad SAW to pray.

During the pilgrimage, this holy Kaaba is closed and no one is allowed to enter it except Muslim officials such as heads of state from various parts of the world.

The Stone Inside Kaaba

Ii is a stone of Hajar Aswad, this stone consists of several pieces that are united with silver, there are three large pieces. Based on history, this black stone originally came from Heaven and was brought to this world by Prophet Adam AS. At first, it is white as milk, and then it turns black as a result of the sins of pilgrims touching or kissing it. The Black Stone has also been stolen in the past, this happened in the year 930. The Black Stone was taken away by the Qarmatian sect, which is a group of Seven Ismaili Shiites.

Now the Hajar Aswad is placed in one corner of the Kaaba with a size of 30 cm and is 1.5 meters from the bottom. When people performing Hajj perform Tawaf, they try to kiss the Black Stone, otherwise they have to show it with their hands, and they recite takbir.

The Inside Holy Kaaba FAQs

What is the holy Kaaba?

The Kaaba is a cube-shaped building in the middle of the Grand Mosque and this is the qibla for Muslims. The point that unites all Muslims in the world, it was built by Prophet Ibrahim AS. and his son named Ismail AS.

Also see: Description of Hell in the Qurʾān (Islam)

Who built the holy Kaaba?

This important building in Islam was built by Prophet Ibrahim and his son Prophet Ismail to carry out orders from Allah SWT.

What is the area and structure of the holy Kaaba?

This sacred building consists of 180 square meters with three wooden columns that hold up the ceiling of the Kaaba. Each column has a circumference of 150 cm and a diameter of 44 cm. Each one of the columns is about 1,350 years old.

4 Signs of High Cholesterol That Important to Know