by ubaid
in Science, Traveling
0 0

Facts About Abu Simbel – The Abu Simbel is one of the ancient monuments of the Egyptian heritage. But it is different from most other monuments in Cairo. This towering stone monument is not in Cairo but in a small village called Abu Simbel located in Aswan, the part of Egypt that is close to Sudan. They are on the west bank of Lake Nasser, 140 miles or 230 km southwest of Aswan. This ancient relic forms such a complex and it is part of the UNISCO heritage site and Abu Simbel is known as the “Nubian Monument”.

Want to know more about these Pharaoh landmarks, from the relocation to the forgotten Pharaoh. This time, let’s explore more about Abu Simbel or the tall monument made of stone. Here are some facts you should know about Abu Simbel!

This Abu Simbel is a relocation because it was not originally here. At first this temple complex was on the banks of the Nile. But over the years later the river water started to rise and this became a threat to the ancient temple (Abu Simbel). Then, the Egyptian government in 1964 decided to relocate this ancient temple and managed by UNESCO. The way to move this temple is to cut the temple into several parts and make sure nothing is damaged. This temple was moved only about 200 meters from the place of origin, the aim was not to hit the overflowing water of Lake Nasser. Today, the process of moving Abu Simbel is considered a very challenging decision and implementing that decision is also very challenging. This is not a cheap or simple thing, Countries around the world pooled $42 million to be able to move this temple safely.

Related post: The Mystery of the Puma Punku Stone Carving 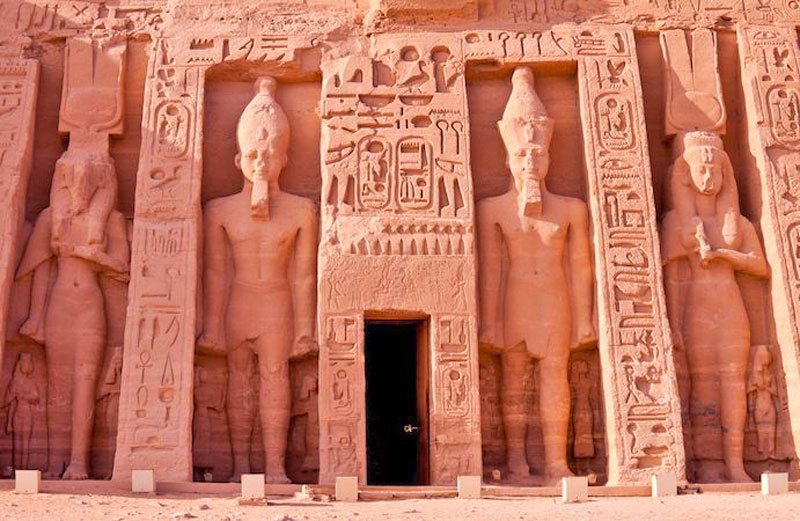 2. This temple is not only dedicated to one god

Other facts about Abu simbel is the temple not only dedicated to One God. King Ramses II dedicated this temple to the sun gods Amon-Re, Ptah and Re-Horakhte. When you look at the front of the temple, there are 4 colossi sitting and they represent each god. The four colossi also mark the battle of Kadesh. This was a very important battle that took place during the reign of king Ramses II.

Inside the temple, the Grand Temple represents the world’s largest concert, where it is 65 meters in diameter and 23 meters in height. It is also functioned to protect the statues.

3. Abu Simbel was forgotten for centuries

Why is Abu Simbel forgotten, this temple has actually been buried as deep as 10 meters under the sand. But then Jean-Louis Burckard, a Swiss orientalist found the ruins of the temple building in 1814.

Fortunately, the top of the decorated temple is visible on the sand. Then in 1818, an explorer from Italy, Giovanni Belzoni entered the temple.

4. The construction of this shrine started a long time ago

Archaeologists believe that the construction of Abu Simbel had started a long time ago or in 1274 BC. To complete this temple took about 30 years, and the work of this temple was completed in 1244 BC.

5. The Temple of Abu Simbel is aligned with the sun

The position of this temple which is parallel to the path of the sun causes sunlight to enter the temple through two points in a year.

This ritual occurs in February and October, or during the growing season and floods. These two seasons marked the coronation of king Ramses II. The sun shone on the three statues, but the fourth statue remained dark. Archaeologists believe that the location of these statues was intentional. But how they built the temple, is still a mystery.

Also read: How Long Did It Take To Build The Pyramids

6. It consists of two temples

Abu Simbel consists of two main temples. The great temple contains several paths and rooms. Full of writings that tell of the military victories of Ramses II. This temple has a height of almost 100 feet or 38 meters with a length of 115 feet. The great temple is very easy to mark because there are 4 colossi in front of it.

Ramses II not only built this great temple of Abu Simbel but he also built a small shrine to Queen Nefertari, his beloved wife. This small temple is located 150 km from the grand temple. In front of the small shrine, 4 large statues of Queen Nefertari and Ramses II are displayed.

7. You can fly to the temple

One more facts about Abu Simbel that have to know now, its about flying to there.

To get to Abu simbel is easier than you might think. You can easily fly directly to Abu Simbel, Abu Simbel village has its own airport, serving domestic and international routes, but the most popular routes are Abu Simbel – Aswan and another Abu Simbel – Cairo. The aircraft that often operates is the Egyptair express.

Abu Simbel and the holy site of Isis in Philae are UNESCO world heritage sites under the Nubian monument name. The area is very wide stretching from Abu Simbel to the lower reaches of Philae.

Both temples were built in the 13th century BC during the reign of king Ramses II. We can see in the temple there are statues of Ramses II and his wife, Queen Nefertari. There are even their children. While the statue as a picture of another king’s wife was not found in the temple. This is because Queen Nefertari was the main and first wife of Ramesses II. She is the most loved among the other queens.

In fact, the Abu Simbel temple consists of two separate temples. Both temples are stone structures that were chiseled and shaped in such a way and both were built during the time of Ramses II during 1200 BC. One of the two temples is dedicated to Ramses II and the other to his wife queen Nefertari.

In addition, the structure of the great temple was also dedicated to the sun gods Ptah, Ra-Horakhty and Amon Ra. This is represented by four large statues sitting in front of the Abu Sumbel temple.

The statues in the temple depicting Ramses II end with Pharaoh wearing a double crown, this means he represents lower and upper Egypt. The building structure also consists of a pillared hall, also has a very beautiful view.

The Queen Nefertari Temple is also known as the Hathor Temple and is located 328 feet or 100 meters northeast of the main temple.