Jacote fruit or Spondias Purpurea commonly known as Spanish Plum, Seriguela is a plant that is still in the same species as cashew nuts. Anacardiaceae, native to tropical America, including the West Indies. This jacote plant has been considered a plant from Africa, India, Sri Lanka, The Bahamas, Indonesia, Bangladesh, and Caribbean islands.

This plant is widely cultivated in the eastern part of Brazil, which is why Spanish plums are found in many Brazilian homes. Brazil is a country with an extraordinary wealth of fruit, and the fruits here are of high quality, this fruit in the region of Brazil is called jacote. Jacote comes from the Nahuatl word xocotl, which means all kinds of tamarind fruit. However, jacote fruit will taste different if it is ripe perfectly, it is a sweet fruit. Jacote has many names and varies according to region. Among the names are Brazilian Plum, Ciruela, Chile Plum, Hog Plum, Jamaica Plum, Wild Plum, Ovo, Jocote, Scarlet Plum, Purple Jobo, Purple Plum, Spanish Plum, Purple Mombin and Red Mombin.

Many jacote fruit are sold on the side of the road and in markets. The travelers from Spain who went to the Philippines, brought these plants to the Philippines and there they were planted widely because of the large land availability. Jacote fruit is often eaten directly even though it is not yet ripe, usually eaten with added salt or lime to increase appetite and increase appetite.

Many jacote fruit are also preserved by boiling and then drying. Dry like this, the jacote will last for several months.

Jocote (Spanish Plum) is a small plant that grows to a height of 7 meters, its crown spreads out. Jacote grows a lot in shrubs, in areas of fences, meadows, and other places.

This plant does well in a wide variety of soils including sandy, gravel, loamy loam, or even calcareous soils. The stem has a large diameter of about 30-80 cm. The skin is gray, rough, cracked, and thick. If the stem is injured, the exudate and sap will come out. The branches tend to grow horizontally and are usually very brittle.

After we know how the characteristics of the jacotek plant, we now look more specifically at the leaves. The leaves are compound, pinnate, bronze red color, and some are even purple when young. Pinnately compound purplish when young or bronze-red. With 5–12 pairs of elliptical-ovate, sub-sessile leaflets, 2-6 cm long by 1.25 cm wide, and shallowly toothed towards the acute apex, oblique base, fall before the flowering period.

In each panicle there are male and female flowers so it is very easy to pollinate. The flower consists of 4-5 sepals and 4 or five small red petals. Pollen does not form because mother cells, called micro-sporangia, do not develop.

Jacote fruit has parthenocarpic characteristics. The fruit is drupe and slightly oval or sub-round in shape. The size is 2.5-5.0 by 1.0-3.5 cm, the kulint is smooth and glossy. When the fruit reaches maturity, it will turn red, purple, yellow or slightly black in color. Mesocarp is a fruit that is juicy and fleshy, about 5-7 mm thick, very aromatic, yellow, and fibrous, with a sour taste.

Historically, jacote or Spondias purpurea is a plant native to tropical America, this plant grows in several regions extensively, from North America to northern Peru and the Yucatan. Now it is widely cultivated including the Philippines, Galapagoes and Nigeria. 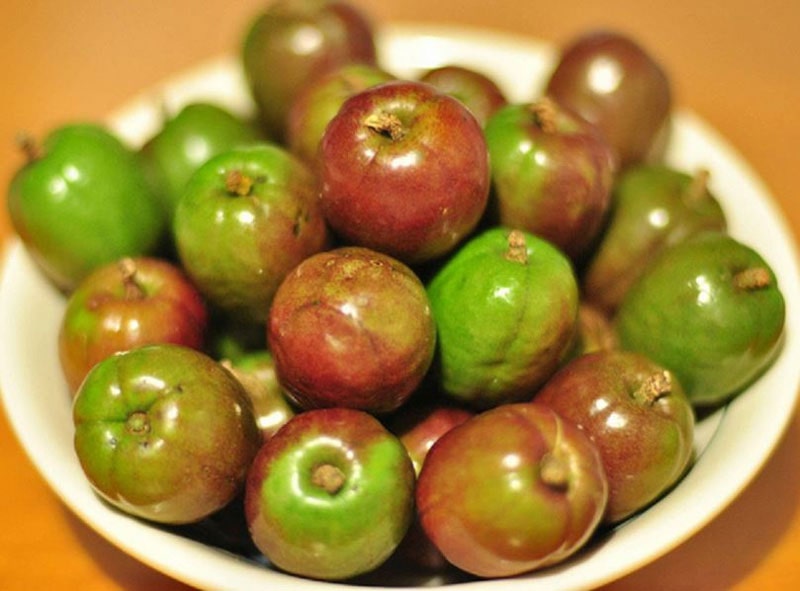 Jacote fruit is a healthy fruit that should be consumed a lot. Now this plant has spread throughout the world. The taste is still sour and has its own charm to eat.

Jacote fruit is rich in nutrients, be it minerals or vitamins. Due to the high content of these nutrients, Jocote (Spanish Plum) has several health benefits. Below we take a look at what are the benefits and uses of jacote or Spanish plum.

Jacote is rich in fiber which helps to keep you feeling full longer. This is good for meal intervals, you certainly don’t want to eat quickly because your stomach still feels full. Apart from being rich in fiber, seriguela is also low in calories, which in 100 grams only contains 76 calories. It is rich in vitamins, and other essential nutrients that support health.

Jacote fruit contains lots of carbohydrates and iron which play an important role in providing energy. For sportsmen, it is very good to consume fruit (Spanish Plum) because it can relieve fatigue and speed up getting a new supply of energy.

Spanish Plum fruit is rich in fiber which is great for digestion. It is good for maintaining bowel function and treating ailments like diarrhea, dysentery, and good for getting rid of gas in the stomach.

The high iron content in Jocote (Spanish Plum) is very useful for preventing anemia. Anemia is a disease characterized by lack of blood and causes body parts to look pale. This is a dangerous disease if not treated properly.

Jocote (Spanish Plum) is also rich in antioxidants, which are important compounds that are useful for fighting foreign objects or toxins that enter the body. Antioxidants will fight free radicals that damage body cells, so that the body can quickly regenerate cells and this is useful for preventing aging.

Seriguela fruit also contains vitamins, potassium, and calcium, these nutrients are very important in reducing muscle contraction and spasms. These health problems usually occur due to deficiencies of these minerals and vitamins.

Pokeberry are dark berry that have many health benefits. The name varies according to where it grows. Among the popular...

Mulberry Vs Blackberry: What’s The Difference

Berries are fruits that are loaded with health benefits. Among them are Mulberry and Blackberry. At first glance, the two...

Benefits Of Quenepas - Quenepas is one super fruit with impressive health benefits. This fruit has many names all over...

How To Eat Guava: Choosing, Washing and Recipes Idea

How to eat guava - Guava is a tropical fruit that is rich in benefits for human health. This is...

Is papaya healthiest fruit, lets we see about the papaya seeds benefits. Papaya is a fruit that is popular throughout...