What does la hawla wala quwwata illa billahil aliyyil azim mean? We often hear this Hawqalah sentence spoken, but sometimes we don’t know what it means. Actually this is a great sentence in Islam and shows that Allah SWT is almighty and there is no power but Him.

This is a universal truth that is believed by all Muslims in the world. Allah alone is capable, and there is no power and might other than Him. The meaning of the phrase Hawqalah (la hawla wala quwwata illa billah) is “there is no power and no power except with Allah’s permission”.

So, creatures (other than Allah) do not have the slightest ability if Allah does not will, because everything is by Allah’s permission. 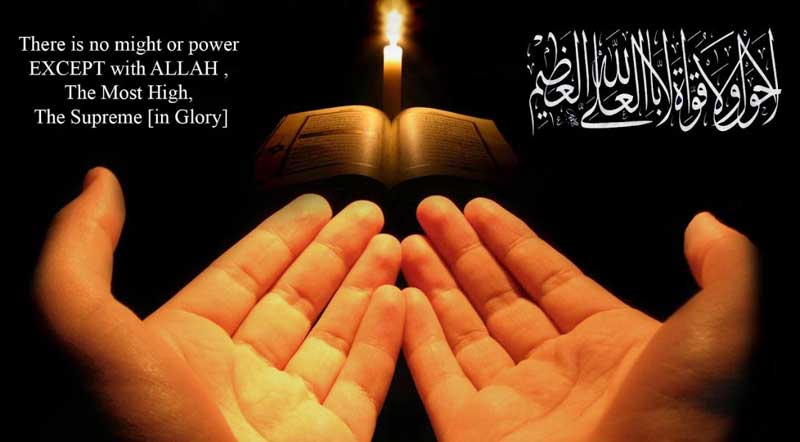 There is no power and no strength except with Allah.

Subhanallah, this is a short sentence but has a very deep meaning, even the entire universe. It speaks of the power in this universe, no one can but Allah Himself. Everything is by Allah’s will, nothing happens by one’s own will. If Allah wills it will happen and if Allah does not will it will not happen. We are all servants of Allah who believe that Allah is almighty, there is no other.

This sentence is also known as Hawqalah. There are many hadiths that say that the Prophet Muhammad PBUH recommended to his ummah to multiply this reciting. There are extraordinary meanings and benefits for a servant when he reproduces this Zikir. When we recite “la hawla wala quwwata illa billahil aliyyil azim” we admit that we are weak, and only Allah is almighty. This is a true and noble form of statement, there is no arrogance from creatures, there is no takabbur.

Also see: Ahlan Wa Sahlan Meaning, This is the Explanation

When a servant of Allah acknowledges the lordship of Allah, recognizing that only Allah is the power, then at that time he has placed himself as a true servant. All of us want to be true servants of Allah, obedient servants and able to carry out all His commands and leave all His prohibitions.

English Translation: There is no might nor power except with Allah.

Note: We advise you not to read based on transliteration. However, this is only for those who cannot read Arabic script. We encourage you to learn how to read Arabic script so that you can read the Koran correctly according to the (مخرج الحروف) makhrajil huruuf. Reading in Latin letters is different from reading in Arabic letters.

The Hawqalah sentence is not an ordinary sentence, there are many hadiths that mention the benefits and virtues of reading the sentence La Hawla Wala Quwwata Illa Billah, including:

1. As a Heaven’s Treasury

2. Say it during Adhan

3. Dua When Leaving The House

This Hawqalah sentence also includes a sentence that becomes an important prayer when we leave the house. This prayer is read so that we get protection from Allah.

Anas (May Allah be pleased with him) said: Messenger of Allah (ﷺ) said, ” Whoever says (upon leaving his house): ‘Bismillah, tawakkaltu ‘alallah, Wa la hawla wa la quwwata illa billah (I begin with the Name of Allah; I trust in Allah; there is no altering of conditions but by the Power of Allah),’ it will be said to him: ‘You are guided, defended and protected.’ The devil will go far away from him”. [Abu Dawud, At-Tirmidhi and An-Nasa’i] Abu Dawud’s narration adds, “One devil will say to another: ‘How can you deal with a man who has been guided, defended and protected?”

The sentence La hawla wala quwwata illa billah is also popular with the name “Hawqalah”, this is a sentence that has tremendous benefits for those who read it.

La hawla wala quwwata illa billah is a sentence that has many virtues for those who read it. It is stated in the book by Sirajuth Thalibin, by Sheikh Ihsan Jampes of Kediri, Indonesia, that the word Hawqalah is very useful.

Know, indeed the advantages of La hawla wala quwwata illa billah are many. Some of it is a hadith that takhrij by Thabrani and Mrs. Asakir, taken from Ibn Abbas RA, that he said that the Messenger of Allah said: Increase the reading of La hawla wala quwwata illa billah because it is a storehouse of the storehouses of heaven, and in it there is healing of 99 diseases, and the mildest is depression.

There is also a hadith in takhrij by Tabrani and Ibn Asakir from Ibn Hurairah RA. The Messenger of Allah (SAW) said, whoever has limited sustenance, then he must multiply the words la hawla wala quwwata illa billahil aliyyil aziim.

and in Alfasyani’s statement from the book Arba’in Nawawi: “including an efficacious prayer is when someone is struck by a difficulty, grasp the fingers of the right hand then the fingers are opened with the sentence “laa chaula walaa quwwata illaa billahil ‘aliyyil adhiim” and pray :

Hopefully this article about the virtues of reciting Hawqalah is useful and can enrich our religious knowledge. If this is useful, please share it on your various social media. Jazakallah khair!

Dua for Shifa – Dua for Healing the Sick

When someone says jazakallah khairan, then we are also encouraged to reply with the sentence wa iyyakum, meaning "and to...

Meaning of Subhanallah, in Arabic it is spelled with (in Arabic: سُـبْحانَ الله). This is an important sentence in Muslim...

Shukran: What Is The Meaning of Shukran in Arabic

We often hear the phrase "Shukran" from many people. Actually, what does the phrase SHUKRAN meaning in Arabic? What Is...