Map of Indonesia and Everything About Geographical Indonesia

Map of Indonesia – Negara Indonesia is a vast country in southeast Asia which consists of thousands of islands in it. As a country with the largest area, on the map of Indonesia it appears that the composition of this country consists of islands both large and small. Among the major islands are Sumatra, Java, Kalimantan, Sulawesi and Irian Jaya. As an archipelagic country, Indonesia is known as a maritime country, an agricultural country and others.

This country, which is right on the equator, has a diversity of cultures and customs as well as various ethnic groups. The ethnic groups in Indonesia, which number in the thousands, also become a wealth of values as a large tropical nation. The extraordinary natural wealth and the beauty of the natural scenery are an attraction not only for local people but also attracting other nations to come to Indonesia on a tour.

Some Maps of Indonesia

Map of the Big Islands in Indonesia 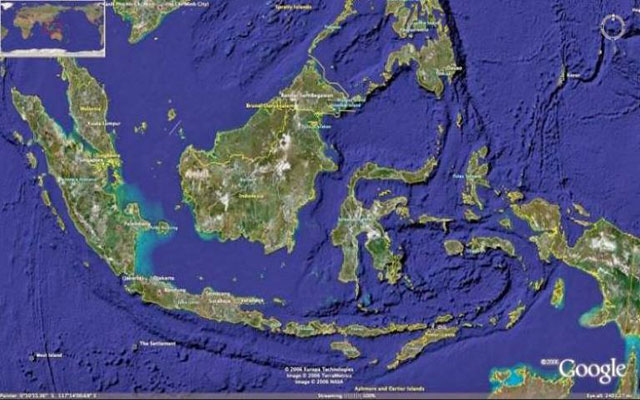 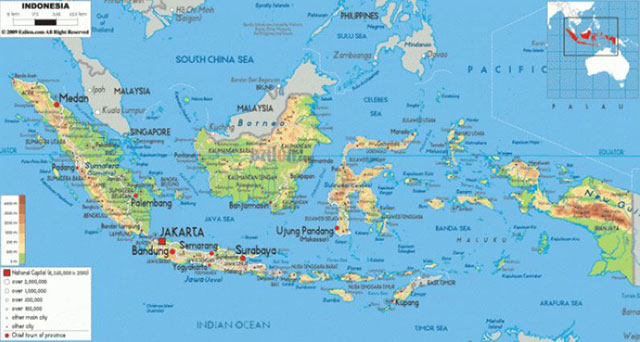 Map of Blind Indonesia, Without Name and Directions

Black and White Map of Indonesia 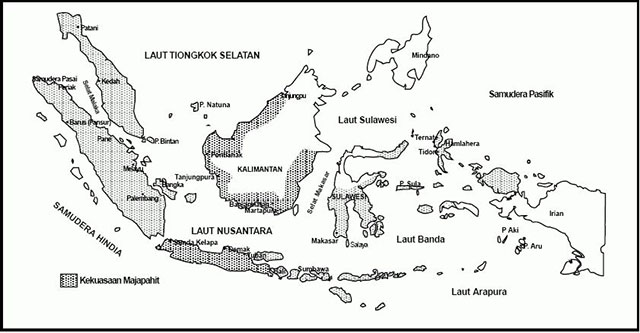 Indonesia, whose capital was moved to Kalimantan, is a very strategic country right on the equator. This green country is located between 6 º N-11 º 08 South Latitude and 95 º E-141 º E with a land area of 1,922,570 km2. Meanwhile, the sea area is bigger than the mainland, which is 3,257,483 km2. You can see directly on the map of Indonesia with its quite large waters so that Indonesia’s marine wealth is certain to be very large.

Indonesia has national borders, both sea and land. This is why there are often border conflicts between Indonesia and neighboring countries. Next, we look at the boundaries of the Indonesian state.

North. In the northern part of Indonesia is bordered by Malaysia, Singapore, the Philippines, the Pacific Ocean, Thailand and Vietnam. Of course in the ocean.

West Side. In this part of Indonesia is bordered by the Indian Ocean and the Indian state. Also still in the ocean

South side. To the south, Indonesia is bordered by the Indian Ocean and Timor Leste, a country that was formerly part of Indonesia. It borders on the ocean and land.

East. To the east, this country is bordered by Papua New Guinea.

Indonesia is a country that adheres to a presidential government system and is in the form of a republic, so of course the Indonesian state is formed from the provinces. Every province in Indonesia has its own regency, and each district is further divided into sub-districts and within sub-districts there is another smallest government, namely the villages or lurah-lurah.

Indonesia is divided into 34 provinces with 416 districts, 98 cities, consisting of 7,024 sub-districts and 81,626 villages spread throughout Indonesia.

In government at the provincial level, there is a Governor who acts as the highest leader who is equipped with the Provincial DPRD. Meanwhile in the regency it is led by the Regent and there is a district DPRD, the city is led by the mayor and the city DPRS which is directly elected by the people through the General Election.

Ok, after we know the system of government, now we look at the provinces in Indonesia and their respective capital cities.

All provinces in Indonesia are 34 and of these there are 5 regions that are different from other regions. These five provinces have special autonomy rights or privileges compared to other provinces. These regions have greater rights in managing their own regions.

Also read: +10 Indonesian Traditional Food You Have to Try

Indonesia is a country known as mega biodiversity because it has quite high biological diversity. Animals or fauna and plants or flora that exist in a country that is on the equator are very diverse and scattered from Sabang to Marauke.

The flora of the provincial identity in Indonesia is the flora of the archipelago which later became a characteristic and symbol for the national flora. In addition to the national flora, there are also names of national flowers that have been designated by the government as a flower that is characteristic of the Indonesian nation. These flowers are jasmine flowers which are called Puspa Bangsa, naggrek moon flowers are called puspa charms, there are also giant patma flowers which are rare puspa.

Not only that, in every province in Indonesia there are also their respective flowers which become a symbol and identity of a province. This regulation is already contained in a government regulation, namely the Ministry of Home Affairs No. 48 of 1989 concerning the determination of regional flora and fauna in Indonesia.

Indonesia is not only rich in flora but also rich in diverse fauna or animals that inhabit the Indonesian region. The fauna in Indonesia is certainly influenced by the natural conditions and natural obstacles that exist in this tropical country.

This fauna is scattered in various regions in Indonesia, its distribution can be seen on a map of Indonesia according to each region. The fauna in Indonesia is divided into three types, namely:

Asiatic Type Fauna: Based on references to maps of Indonesia, the distribution of this fauna is from the western part of Indonesia, to the Makassar Strait and the Lombok Strait. This area lives large mammalian animals such as elephants, rhinos, tigers, bears and orangutans.

Fauna Type Australis: Based on information from maps of Indonesia, Australian animal types are easily found in eastern Indonesia. Dinatara these animals are types of birds such as birds of paradise, cassowary and parrots.

The division of fauna into asiatic type fauna, australis type fauna and transitional type fauna is based on the classification made by Max Wilhelm Carl Weber and Alfred Russel Wallace.

As a large country, Indonesia occupies the fourth most populous country in the world, amounting to around 270,054,853 million people according to the 2018 BPS.

Some of the original Indonesian inhabitants were from the Austronesian people and some came from the Melanesian, Polynesian, and Micronesian nations. So each area has its own uniqueness and identity or what is called ethnic groups. There are thousands of tribes in Indonesia which originally came from the same nation as we just mentioned.

Meanwhile, in terms of belief, the Indonesian nation, which has so many ethnic groups, certainly has different beliefs. In Indonesia, not all religions are recognized, there are only a few religions that are recognized by the state in the sense that they are legalized for their adherents to follow according to their beliefs. However, the largest and most adherent religion is Islam.

After we know a little about Indonesia’s population, now we are trying to see how the climate topography in Indonesia is.

As a country that is geographically located right on the equator, it is natural that there are two types of seasons in Indonesia, namely the rainy season and the dry season.

The existing marine climate also causes the dry land to feel humid, during the day the influence of the sea breeze makes the land more humid. Meanwhile, at night, the sea breeze warms up so that the nights in Indonesia are not too cold and cool.

Indonesia is an area filled with highlands and lowlands as well as towering mountain peaks like a series of the highest mountains in Indonesia. Geographical conditions like this also cause different climate changes and variations.

100+ Ethnic Groups in Indonesia and their Regions of Origin [Complete]

Function and Position of Indonesian Language

The function of Indonesian as the national language and state language. On this occasion we will review the Indonesian language...