Picasso Bug Facts – This is one type of anthropod, but it also has a more common name, namely the Zulu Hud Bug, they are colorful and visually appealing insects. The Picasso Bug is a unique insect that has a shell-like barrier and is one of 450 species of unusual insects.

Researchers who are very familiar with these invertebrates say that their scientific name is Sphaerocoris annulus, a name that is very difficult to pronounce. Apart from all that, this is a very amazing natural wonder.

Furthermore, Sphaerocoris annulus is one of 450 unique insect species with self-protection (a kind of shell). However, the insect with the name Picasso Bug is sometimes also called the beetle.

Fortunately, the Picasso Bug is now fairly stable with a large number. This animal continues to expand and spread, so the IUCN does not include the Picasso Bug as a rare animal or in the red list as an endangered animal.

However, while the Picasso Bug may appear to be a beautiful arthropod, it is a potentially risky animal. Potentially at risk of extinction with various possibilities including climate change. 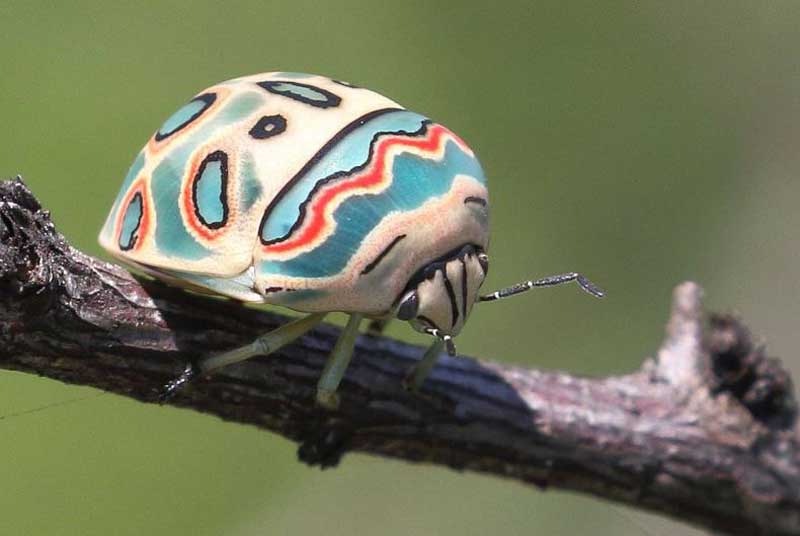 See too: Can Humans Eat Grass as Other Animals?

It is a visually beautiful animal of the average size of an anthropod, physically still considered a small insect. But even though it’s small, there are many other attributes that can cover the shortcomings in terms of size.

This insect is different from most other insects, it does not show any degree of sexual dimorphism. This beautiful insect also differs from other beetles in that it has an elongated thorax, it has a shield over its belly and above its wings.

In addition, the insect with the name Picasso Bug also has a distinctive appearance, where each specimen usually shows an oval shape. The average individual measures about 0.25 inches or 6.3 mm in body length. Despite its artistic appearance, few have ever seen the beauty of this little animal.

The back color is usually green, but there’s still an amazing variety of patterns. There is a variety of spots on the wings where the location and size varies but is always not less than eleven. Here’s the biological classification of the Picasso Bug!

These beautiful invertebrates called anthropods were first known to appear on the African continent and then spread to South Africa, Ethiopia, and Cameroon. The Picasso Bug is a beautiful insect that is native to most countries in the world.

Also see: Pictures of All Animals on Earth

These tiny and beautiful animals usually inhabit surprising areas, namely dry and arid areas. This is as found in the sub-Saharan section.

But the surprising thing is that the Picasso Bug is an insect that is closely related to bed bugs. That is why, it will still emit a foul or dangerous odor when disturbed. However, these effects are not harmful, only temporary discomfort.

This animal is also a herbivore where it eats plants like many other species. But this beautiful insect called the Picasso Bug usually eats fruit juice, unfortunately sometimes it eats commercial fruit juice that is cultivated by many people.

It is still a beautiful animal with various intricate but very interesting patterns. Its small body distinguishes it from other species in terms of the beauty of the pattern that appears and the color on the back shield.

Natural beauty like this is an extraordinary attraction, even famous artists such as Picasso have painted these insects. This shows that insects such as these anthropods are indeed beautiful animals that are gifted by nature.

The shape is unique and funny, this is known as the Oreo Cookie spider, hourglass spiders are trapdoor spiders. All...

Cockroaches are insects that are often found in our homes, sometimes in our cupboards and kitchens. These are disgusting insects...

Does Rice Turn Into Maggots?

Have you ever bought rice or flour in bulk? To be able to save costs, sometimes we often buy staple...