Indonesia is a country that is right on the equator. This gives luck to Indonesia, especially for the growth of various flower plants. There are a number of unique and rarely found flower plants but they are grown in Indonesia. This rare flower is sometimes increasingly rarely seen so it needs protection from the local government to preserve this rare flower.

Here we look at a number of rare flowers in Indonesia that require serious attention from the government so that these flower plants can still exist and continue to be seen and enjoyed by posterity. 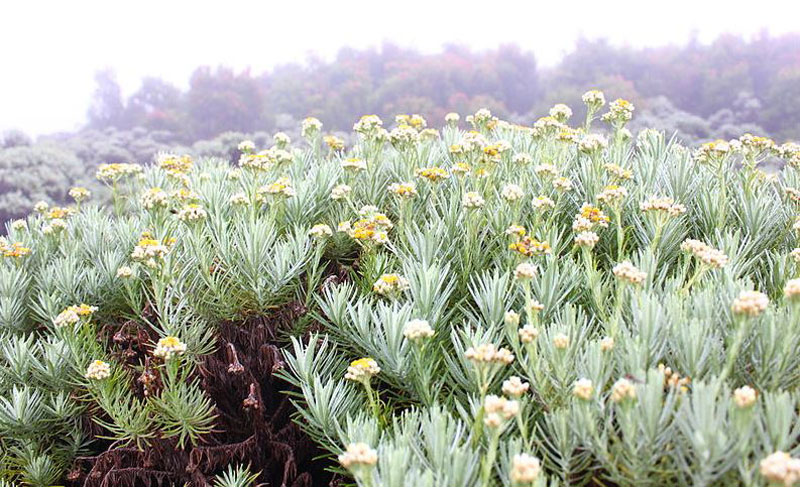 Java Edelweiss flower is increasingly rare because it is located and grows on the hiking trail so that many climbers pick it. The hallmark of the Edelweiss plant is that it has hairs on its stems and many shrubs. The branches are grayish-white, the flowers are shaped like small humps, and this is an attraction for many insects. 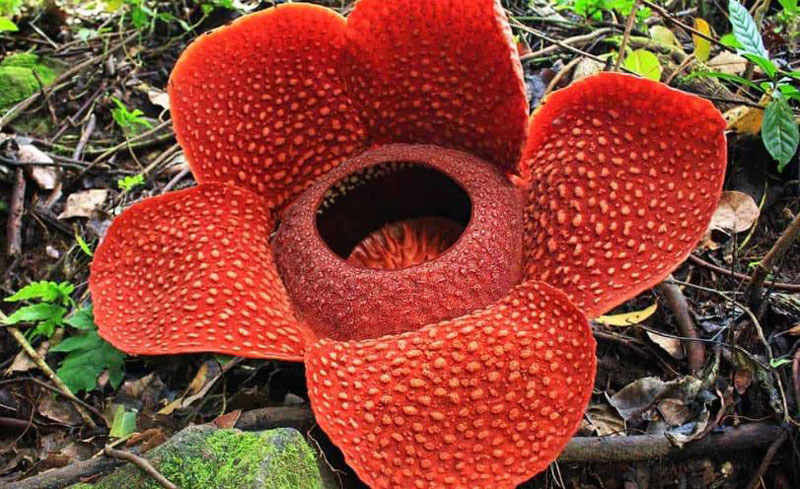 Rafflesia arnoldi is one of the most popular flowers in Indonesia and it is included in the rare flowers in Indonesia. Even the existence of this flower is recognized by the world as a rare flower. Besides being rare, Rafflesia arnoldi is the largest flower in the world, where the diameter reaches one meter and can weigh up to 10 kg. Rafflesia plant is an endoparasite in plants and it belongs to the genus Tetrastigma. For this flower that can be seen from the outside is the part called the five-crown flower.

The Rafflesia plant which is widely known in the community is the type of Rafflesia Arnoldi. This type of rafflesia only grows in Indonesia and precisely in southern Sumatra, especially Bengkulu. The rafflesia flower is the same as the carrier flower in that it smells like a stench. 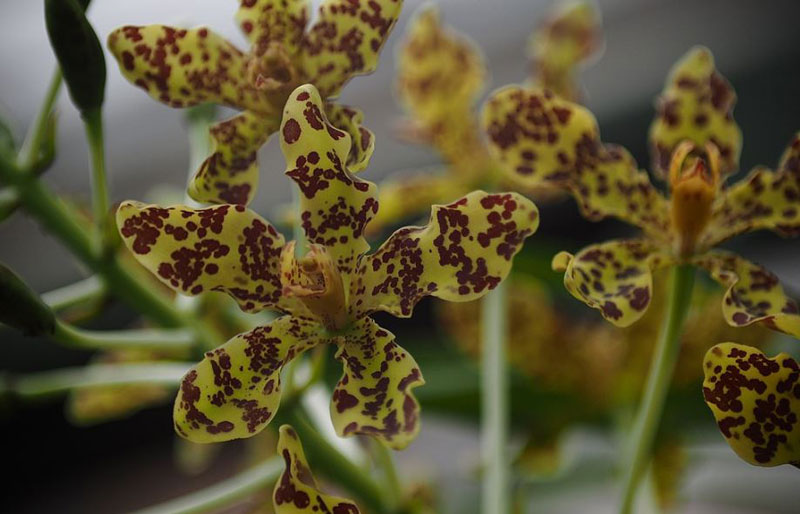 So, because of its uniqueness and rarity, the sugarcane orchid is one of the flowers that is protected by the government and it is included in one of the rare flowers in Indonesia. 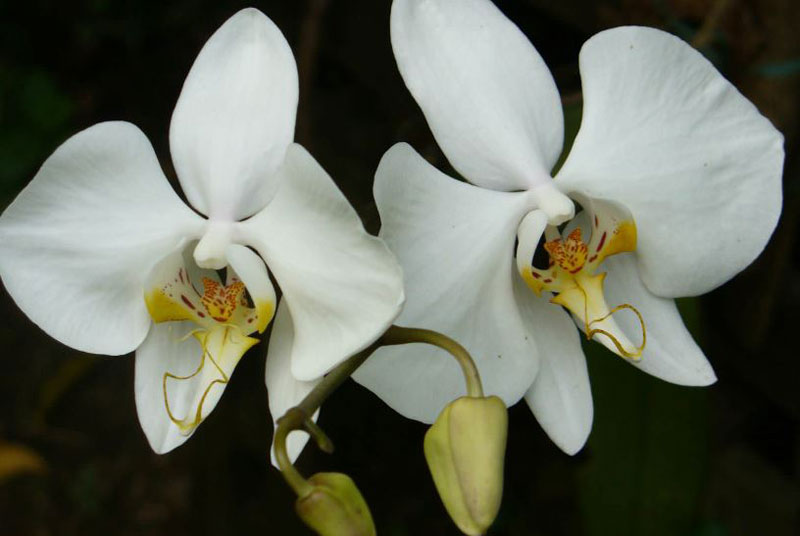 Furthermore, the rarest flower in Indonesia is the moon orchid. This flower plant in Indonesian is called “Moon Orchid”. This is a flower that is already rare and it has become a symbol or the so-called national flower of Indonesia.

This orchid has its trademark, its petals are wide and white. This is different from the cane stem orchid because it does not like sunlight. The leaves are green and elongated in shape, it has fleshy roots with a sweet fragrance when the flowers bloom. It appears more often as a crossed orchid variety.

This is Tien Suharto’s orchid (the name of the wife of one of the presidents of Indonesia). In scientific language this orchid plant is called “Cymbidium hartinahianum”. This is a flower plant endemic to Indonesia. This plant appears in several places in Indonesia such as in North Sumatra. This type of orchid was discovered in 1976 in Samosir District (in the middle of Lake Toba), North Sumatra.

Tien Suharto is the first lady of Indonesia. The name of this orchid is given by her name because she is one of the women who are trying to develop orchids in Indonesia.

This orchid is a type of soil orchid and grows in groups. He needs open space to grow well and healthy. Usually it grows among the grass, between ferns, pitcher plants and others. it grows at an altitude of 1700 above sea level. The leaves measure 60 cm and are pointed.

The flowers of Hartinah Soeharto’s orchid are very thick, the petals are as big as the crown petals, the top of the flower is greenish yellow and the bottom is brown, and the edges are yellow. The Tien Soeharto orchid is one of the rare flowers in Indonesia and it only grows on the island of Sumatra. 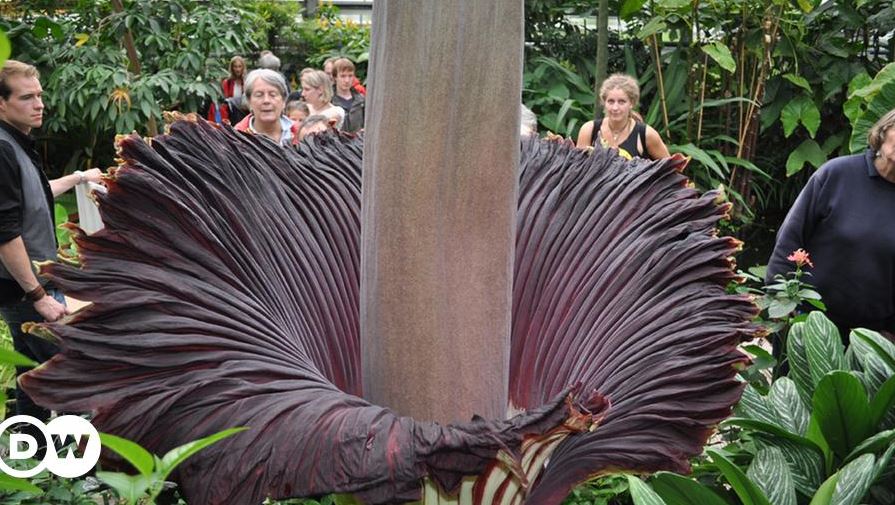 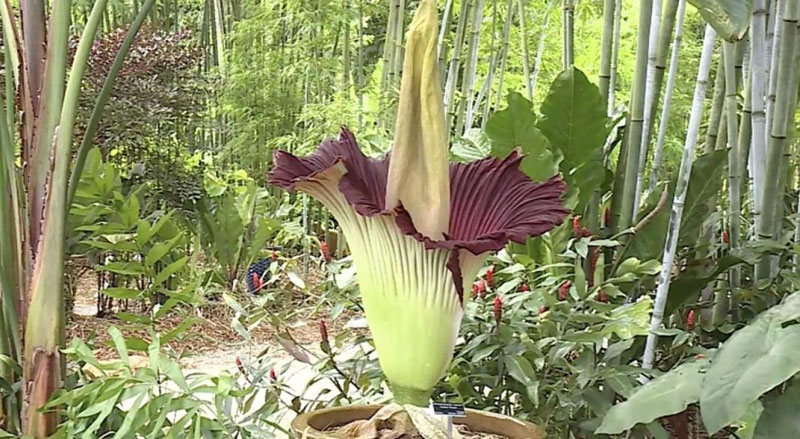 Titan Arum flowers have two growth phases, the generative phase and the vegetative phase. In the vegetative phase, a single stem and leaves appear like papaya. The flowers can only grow when the tubers under the soil are 4 kg. This flower is include in one of the rare flowers in Indonesia even in the World. 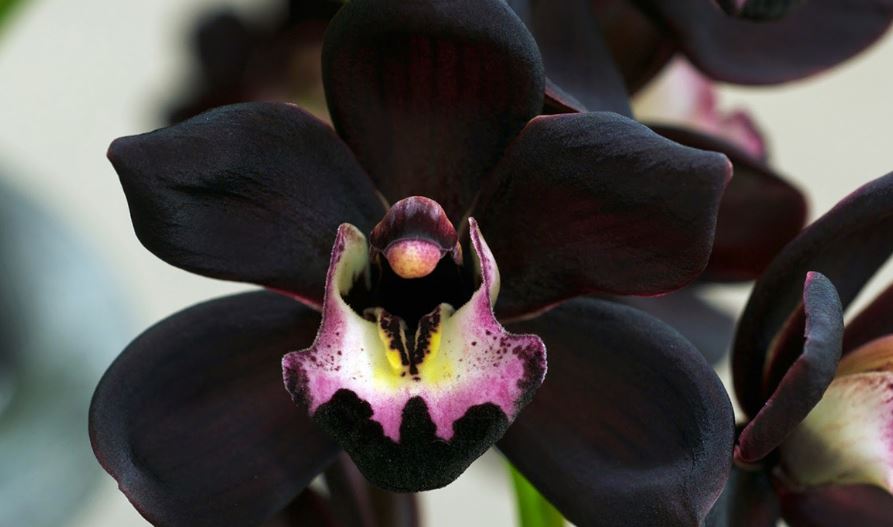 Black orchid is a type of orchid that is very popular in Indonesia and even in the world. The black orchid or Coelogyne pandurata can only be found in Kalimantan and Papua.

However, there is a difference between the black orchid of Kalimantan and the black orchid of Papua. The Kalimantan black orchid has blooming flowers with green decorations. While Papuan black orchids have bright pistils. It is not a ground orchid as it usually grows on trees and rocks. Why is it called a black orchid? The reason is because it has a black tongue (labellum) and there are few green or hairy stripes. The flowers are very fragrant, and bloom in not March and June. 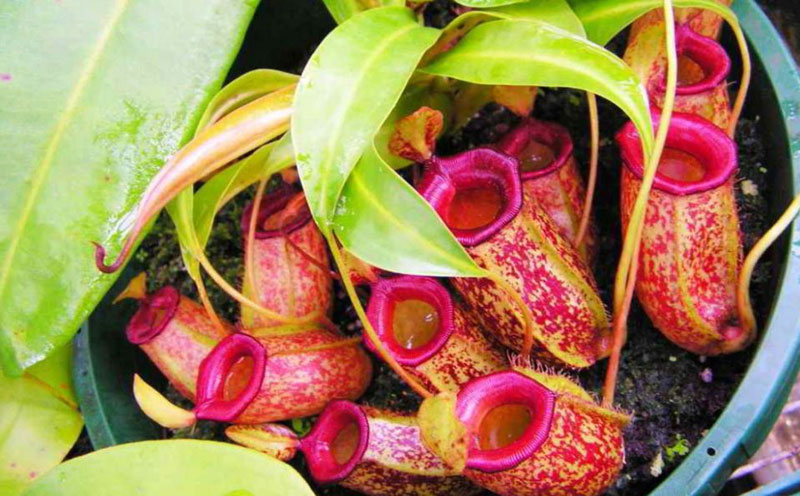 Kantong semar is one of the rare flowers in Indonesia. The flowers are pocket-shaped, hence the name is also called the semar pocket.

Nephentes or pitcher plants are carnivorous flowers, so they are different from other flowers in general. Nephentes flowers are called carnivores because they can catch insects that come to steal their nectar. The trapped insects will die and the nutrients will be absorbed by the flowers or plants.

Nephentes or Semar pocket is a unique and rare plant that only exists in Indonesia. when it is young, the predatory pouch on Nephentes is closed and when this flower matures, it will open and be ready to pounce on insects that come. 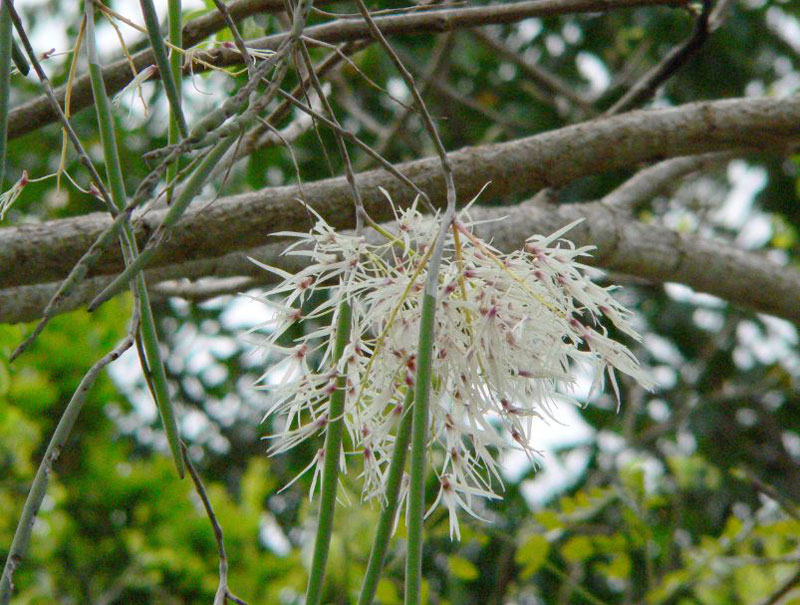 Pencil orchids have attractive and beautiful colors. This flower becomes very valuable because it lasts up to 22 days. The pencil orchid is one type of flower that can attract the attention of British people. This plant is titled with the queen of orchids and gets a first class certificate.

The pencil orchid is a flower found in Labuan, Kalimantan. This flower was named by a famous botanist, Papillionanthe hookeriana. 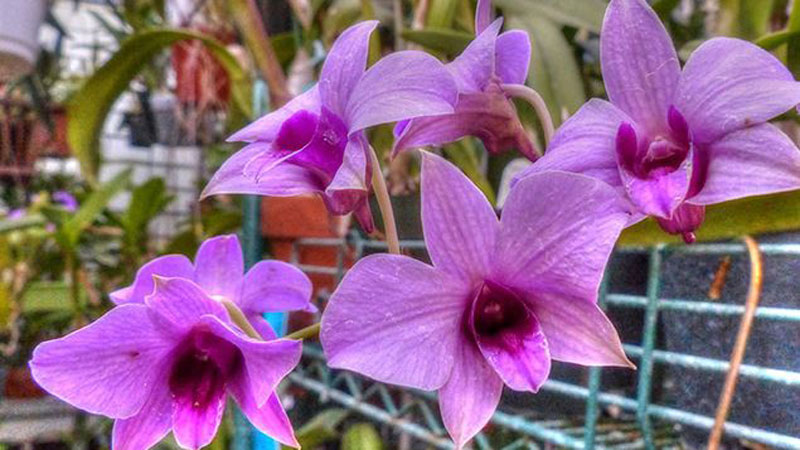 Furthermore, the rare orchid flower in Indonesia is Larat Orchid, even this is one of the rare flowers in Indonesia and even the world. Larat Orchid is an orchid from the Moluccas, named the Larat Orchid because it is found in the Larat Islands. Meanwhile internationally, this orchid is known as the cooktown orchid. Cooktown orchid is a flower that represents the province of Maluku. The stems of this orchid plant are small at the base, in the middle it enlarges and shrinks again at the ends.

Those are some rare flowers in Indonesia, even all these types of flowers are famous flowers in the world and are rare in the world too. So, its existence is now increasingly rare and the government must take a policy towards the preservation of this rare flower so that it does not become extinct.