It can be said that Subhanallah is a sentence to show Allah is the only almighty, who besides Him has absolutely no power, because all other than Him need Him and Allah does not need other than Him. So, when a Muslim sees something astonishing, he is recommended to say SUBHANALLAH. Our admiration for something beautiful and everything is a form of our admiration for the one who created it, this is Allah, so we say Subhanallah in every admiration for creatures, because all of it is Allah the almighty who wills.

So, we can understand that the meaning of Subahanallah is Allah is perfect, Allah is most holy, most exalted (all this shows that Allah does not need other than Him and besides Him needs Allah), all these meanings are contained in the tauheed sentence (لا إله إلا الله).

Also read: The Virtues of The Last 2 Ayat of Surah Baqarah

Ayat in the Quran That Mention The Subhanallah

In the Qur’an there are several verses in which there is a mention of the sentence SUBHANALLAH. This aim is so that humans do not compare Allah with False Gods (gods). So, the sentence Subhanallah contains the meaning to purify Allah and not to equate him with others. God is the only one who is great, powerful, and God is free from all flaws.

So, we say that the phrase “subhanallah” spoken by Muslims is a form of admiration for the power of Allah who has made something extraordinary or extraordinary. So, when someone sees an amazing thing, it is circumcised on them to say the taqdis sentence (Subhanallah). 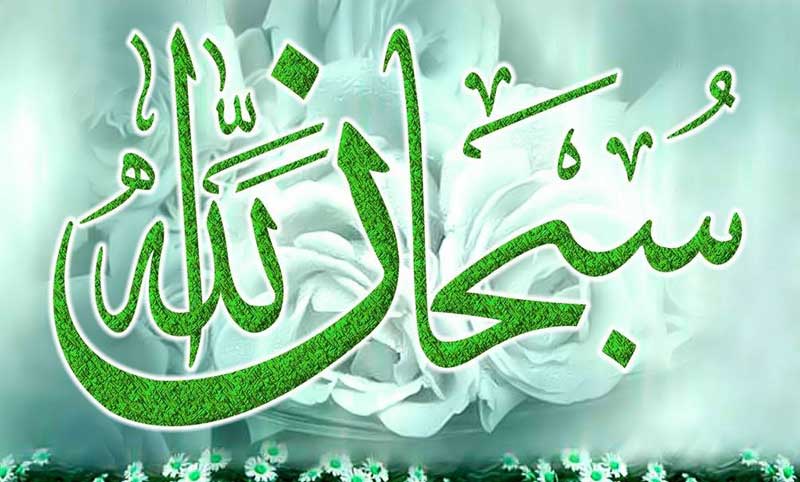 Subhanallah is a Powerful Dhikr

The meaning of subhanallah also as the dhikr. The dhikr or remembrance is worship that is done by repeating certain sentences. For example, recite Subhanallah, Allahu-akbar, or recite the tahmid sentence (Alhamdulillah) repeatedly, tens of times, hundreds of times or even thousands of times. The dhikr can also be read in the heart or orally with a large voice (jahr). One form of dhikr (Zikir) that has great virtue is reciting SUBHANALLAH which is known as tasbih.

Reading the sentence Subhanallah repeatedly is worship because the goal is to seek Allah’s pleasure, be grateful for Allah’s blessings, and this remembrance worship has certain advantages. For example, it can clean our hearts, and give blessings in our lives and others.

The worship of reciting dhikr has been exemplified by the Prophet Muhammad and it is recommended for his ummah to get used to reading dhikr including Tasbih, Tahmid and Takbir. Tasbih is the word of SUBHANALLAH, takbir is the word of ALLAHUAKBAR and tahmid is the word of ALHAMDULILLAH.

In a hadith narrated by Sayyidina Ali, when Fatimah asked for help from several slave girls at that time and told the news to Aisha and then told the Messenger of Allah. Then he said, “Shall I tell you a thing which is better than what you asked me for? When you go to your beds, say: ‘Allahu Akbar (ie Allah is Greater)’ for 34 times, and ‘Al hamdu Li llah (ie all the praises are for Allah)’ for 33 times, and Subhan Allah (ie Glorified be Allah) for 33 times. This is better for you than what you have requested.”

It’s really easy to worship by just saying Subahanallah, Alhamdulillah and Allahuakbar. This is a form that we remember Allah as the true God. It doesn’t take much effort for this, but Allah rewards many rewards.

It means: “So remember Me; I will remember you. And be grateful to Me and do not deny Me.” Surah Baqarah father 152.

In a hadith from Abu Hurairah, Rasulullah SAW said:

“He who utters a hundred times in a day these words: ‘La ilaha illallahu, wahdahu la sharika lahu, lahul-mulku wa lahul-hamdu, wa Huwa ‘ala kulli sha’in Qadir (there is no true god except Allah. He is One and He has no partner with Him; His is the sovereignty and His is the praise, and He is Omnipotent),”

Then he will be given a reward equal to the reward of freeing 10 slaves, a hundred good deeds will be recorded for him and a hundred bad deeds will be written off for him and he will be guarded against the devil on that day until the night, and there is no one better than him on that day. unless the person reads the sentence more than he has read.

“And he who utters: ‘Subhan-Allahi wa bihamdihi (Allah is free from imperfection and His is the praise)’ one hundred times a day, his sins will be obliterated even if they are equal to the extent of the foam of the ocean.”

Jabir (May Allah be pleased with him) said: The Prophet (ﷺ) said, “For him who says: ‘Subhan-Allahi wa bi hamdihi (Allah is free from imperfection, and I begin with praising Him, and to Him), ‘ a palm-tree will be planted in Jannah.”

Abu Hurairah (May Allah be pleased with him) said: The Messenger of Allah (ﷺ) said, “There are two statements that are light for the tongue to remember, heavy in the Scales and are dear to the Merciful: ‘Subhan-Allahi wa bihamdihi, Subhan-Allahil-Azim [Glory be to Allah and His is the praise, (and) Allah, the Greatest is free from imperfection]’.”

Also see: Shukran: What Is The Meaning of Shukran in Arabic

When To Say Subhanallah

In short, the meaning of Subhanallah is as a sentence that shows the majesty of Allah, so that when we see something beautiful and amazing, we remember Allah by saying Subhanallah, because something we see is Allah’s creation.

What is Subhanallah Meaning? Ok here we will explain about the sentence of Subahanallah. In the book Sirajuth thalibin, the composition of Sheikh Ihsan Jampes, Kediri, Indonesia, he in explaining the book Minhajul ‘Abidin, a phenomenal book written by Hujjatul Islam, Imam al Ghazali, stated that the meaning of the sentence Subhanallah is the Isim (sentence) of fathah (harokat fathah). The origin of the word is taken from Sabbaha fil maa’ iza ghaba (diving in water, it is said that if he is already in the water and is no longer visible on the surface of the water). So, the meaning of the phrase Subahanallah is to cleanse Allah of all things that are inappropriate to Allah.

Someone who reads the TABIIH sentence, he always cleanses Allah of those who are not worthy of him. This is a servant’s acknowledgment of Allah who is most holy from all things that are not good.

We are encouraged to say the phrase “subhanallah” when we see something beautiful or something that makes us astonished. Why? because what is beautiful is created by God. That is, we marvel at the creation of the almighty God, who is free from all flaws.

So, the Subhanallah Meaning is purify the Allah, a sentence that gives meaning that we respect to our Lord Allah, this servant knows that Allah is not the same as a creature who cannot be separated from shortcomings from various sides.

Reading Subhanallah and doing it regularly will provide certain benefits to the reader, including the benefit is that when it is read 33 X (time), and combined with the sentence Hamdalah (Alhamdulillah) 33 X and the sentence Takbir (Allahuakbar) 33 times, then Allah will take care of a person when he is sleeping as well as when he wakes up from his sleep, he will find himself in a healthy and fresh state.

Even if a person wants to wake up in the middle of the night at a certain time and he recites these sentences 33 times (each sentence), then Allah will keep him awake at the time he needs it. So, the Subhanallah meaning is very large and truly infinite.

Dua For Safar (Prayer for Traveling)

When someone says jazakallah khairan, then we are also encouraged to reply with the sentence wa iyyakum, meaning "and to...

Shukran: What Is The Meaning of Shukran in Arabic

We often hear the phrase "Shukran" from many people. Actually, what does the phrase SHUKRAN meaning in Arabic? What Is...