Twizzlers is a food product in the form of candy that is very popular in America, or this is a popular licorice candy product. This is a snack food with Licorice flavor so the name of this product is named “Licorice”. Usually sold in black licorice or red licorice. Twizzlers are very popular among children and even many adults like their taste.

Twizzlers are made in many different flavors and shapes. Among the variations of Twizzlers are Twists, NIBS, Pull ‘n’ Peel, Filled Twists, cherry, Bites in black, and even chocolate flavor which are loved by many children who love chocolate.

However, amid its popularity, are Twizzlers vegan or not. This is a concern among vegan dieters. To find out the answer, let’s see the review to the end!

Vegan food is food that is made without any mixture with animal products or animal product derivatives. Candy especially the no-chocolate variety, this seems to be a place for hidden animal products. However, in by-products it is also very common to have ingredients derived from or related to animals.

Among the animal ingredients that are usually found in candy are as follows:

The texture of Twizzlers is hard but chewy, this can be one place to suspect the presence of gelatin. Well, if there is a gelatin ingredient then Twizzlers is not a vegan food. Let’s see if Twizzlers contains gelatin? 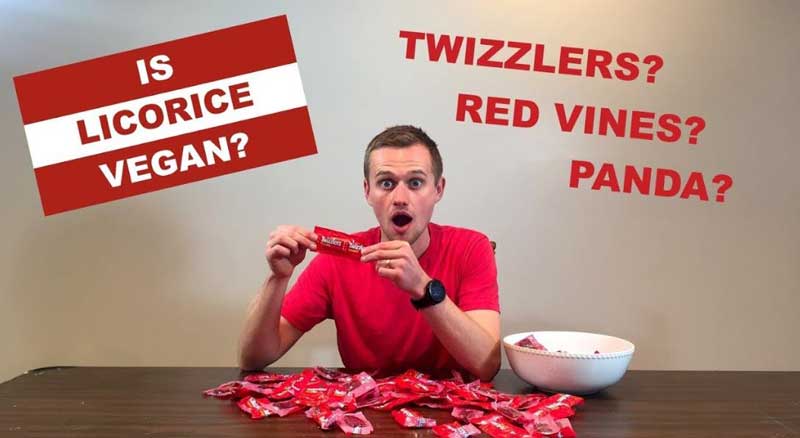 This is the list of ingredients for strawberry twists. While the ingredients are used for other flavors, you can find them on the Hershey website.

A good piece of information for vegans, as Twizzlers does not contain gelatin.

But, are Twizzlers vegan? Not necessarily vegan, let’s get to the other ingredients. The only ingredient that might make Twizzlers non-vegan is glycerin, it’s a by-product of soap making and generally uses animal fat.

But fortunately again that the glycerin content in Twizzlers is from vegetable products or vegetable oils. Indeed in Twizzlers there is a red color, but this is not the color of carmine. They mention that this red color is not made from materials derived from insects.

Also see: Are Sprinkles Vegan, What Are The Ingredients?

So, are Twizzlers vegan? The answer is “Yes, it’s vegan”. The ingredients for these Twizzlers are also commonly found in other snacks labeled as “vegan”.

However, whether candy without animal products is healthy, it is not necessarily healthy. Not always vegan food is also healthy. There are also problems with Twizzlers, for example the red color is not from animal products and their derivatives, but this is derived from refined petroleum or coal or from palm oil where this development causes deforestation and destruction of animal habitats. Some vegans also object to corn syrup and preservatives.

For those of you who want to get food like Twizzlers that are truly vegan, maybe you can take a look below.

There are other licorice products that may use simpler ingredients than Twizzlers. Of course, some of them are vegan. So, before you buy a licorice product, it’s a good idea to check the packaging carefully.

Here are some alternatives to Twizzlers that are considered vegan and safe for vegan dieters.

These foods are vegan, and only made by relying on non-animal-derived ingredients. However, it is different from licorice cream because it is non-vegan. However, products such as raspberries, real black licorice, soft licorice bears, are vegan foods, however.

The company claims that their products are vegan. It’s also sugar-free, gluten-free, kosher, without the use of nuts, non-GMO, as well as using organic ingredients. You can choose from four licorine flavors.

This is the first licorine candy to be produced using organic ingredients. There are many flavors available such as sour mango flavour, but all of them are organic and vegan.

Ok, now we know, are Twizzlers are vegan or not. for those of you who like to eat Twizzlers, you can try it because it is safe and it is vegan as we have explained. But if you want a purer one you can try some other licerice products that use simpler ingredients with a 100% vegan claim.