Guatape is a tourist spot with a two-hour drive from the city of Medelin, Colombia. to be precise in the city is a beautiful town two hours from Medellin, Colombia. What’s interesting about this city is the giant rock that towers high with hundreds of steps made to get to the top of the large rock. This giant rock is called The Rock of Guatape. 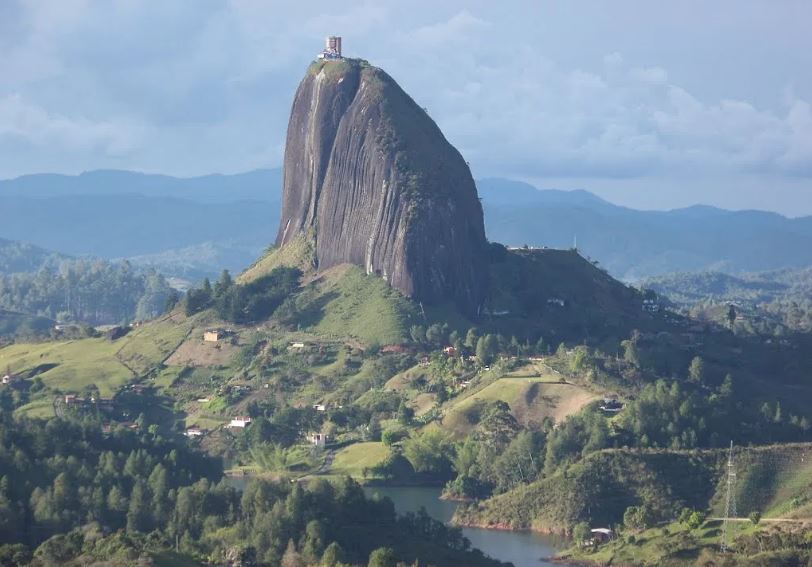 This big rock has been around for millions of years. Previously, the inhabitants of this place were familiar with the name of the Tahamies tribe, they became this big rock as a god who was worshiped.

This giant rock has its own history. To the north of the rock, there is a painting depicting the letters G and U. If we look at wikipedia, Guatapé and El Peñol have long been arguing over who owns the big stone. Later, the inhabitants of Guatape painted the large rock as a sign that it was theirs. They want to write GUATAPE with a big hurtuf on the rock. However, only G and part of U are resolved. After this was discovered by the residents of El Penol, they mobilized large masses to stop the work of the GUATAPE people. So, only the letter G and part of the U have been drawn.

Also see: Hotel Belvedere Switzerland on The Edge of The Rhone Glacier

At the highest point above this boulder, on the southeast side to be precise, the altitude reaches 2,135 meters (7,005 ft) above sea level. To get to the top of this giant rock, we have to go through 659 steps. This peak is called the peak of La Piedra Del Peñol (Spanish for “The Rock of Guatapé”). When you reach the top, you can see an extraordinary view, all sides of the city will appear and look beautiful as far as the eye can see.