The Difference Between Zakat, Infaq and Alms, According to Islam

Zakat, donations and alms are acts of charity that are highly recommended in Islamic teachings and some are even obligatory such as zakat. Zakat must be paid to those who are entitled to receive zakat when it reaches the nisab and haul. So, do not let us be mistaken or confused in interpreting zakat, donations and alms. So in this article, we will explain the differences between these three terms, namely zakat, infaq and alms.

Between the three terms there are similarities – yes and there are differences. So, in understanding it we have to look from an Islamic point of view.

Zakat, infaq and alms have similarities in that they both have lessons for alleviating poverty. Obviously, because everything is in the form of giving wealth in the way of Allah and spending it according to what Allah commands.

While the difference, one of which lies in the law, where zakat is something that must be issued when it reaches the nisab and haul, while alms and infaq are the giving of assets in the way of Allah, where the law of circumcision is not obligatory.

Difference of Zakat, Infaq and Alms

To be clearer about the differences, here we look at the schemes for understanding zakat, infaq and alms. 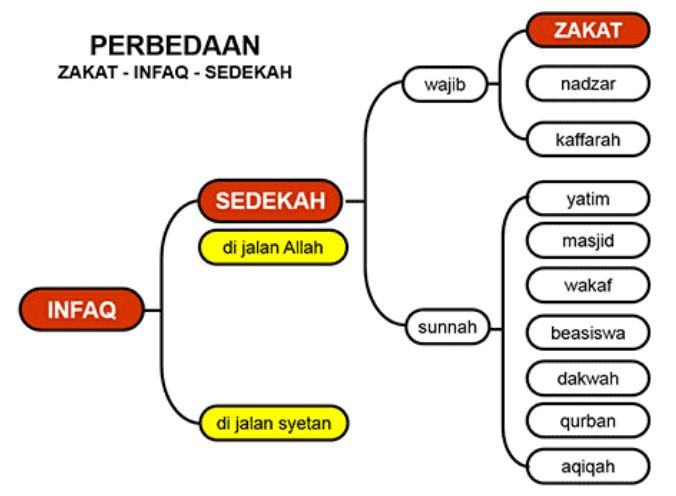 So, zakat is mandatory giving while infaq and alms is not obligatory, aka sunnat. Or we can also say that the difference is that zakat is something that already has a limit and standard of syara ‘to be issued, while infak and alms for sunnat worship that have no limits, can be given whatever is sincere and can be given to anyone.

Ok, simply and easily understood, the differences between zakat, infak and alms are:

Definition of Zakat, Infaq and Alms

To clarify the understanding of these three terms, we write a complete review below, hopefully useful.

Alms is derived from Arabic which means true because the origin of the sentence is Shadaqa. So, people who like to give charity are people who really practice the teachings of Islam. If we look at the terminology of syara ‘, sadaqah is tahqiqu syai’in bisyai’i, assigning something to something else. Placing an amount of money in a person or in an institution.

Not only that, even a smile that is given to others is also a charity. So, charity has a very broad scope and any kind of donation is also charity. All forms of goodness that we do to others are not bound by time, amount and rules and are not bound by matter (can be non-material). Suppose you remove branches on the road, this is also almsgiving. Even giving energy to help someone is also charity.

Almsgiving has the same meaning as infaq. Infaq law and its provisions are the same as sadaqah. It’s just that charity is broader in scope than infaq, because infa is something that is related to matter, while alms don’t have to be material but can also be non-material.

In a hadith narrated by Imam Muslim from Abu Zar, Rasulullah SAW said:

“If you are not able to give alms with wealth, then reading tasbih, takbir, tahmid, tahlil, husband and wife relations, or doing amar ma’ruf nahi activities may be sadaqah.

In another hadith, the Prophet gave an answer to poor people who were jealous of rich people who could give alms with their wealth. He said:

Zakat means, etymologically, “increase”, grow and are blessed. Can also be interpreted as cleansing and purifying.

Paying zakat because of faith in Allah, then what is issued will not be in vain and it will return a lot of good to him. In this case, Allah SWT said which means:

“Collect zakat from some of their wealth with zakat that you clean and purify them”. (QS: At-Taubah: 103)

For example, when the goat that is owned reaches 40 heads, and it has reached the age of haul (a year), one goat must be zakat.

Infaq comes from anfaqa which means to spend a living or to spend something on something. In terminology, infaq is removing part of the property voluntarily or issuing income or income for an interest advocated in religion. Infak is the same as sadaqah sunnat, it does not recognize the existence of nisab and haul.

“Infaq is issued by every believer, both high and low income earners, whether they are rich or poor (QS. 3: 134)”

Infaq can be given to anyone including the elderly, poor, orphans and others.

When this type of worship, both zakat, donation and alms play an important role in driving the economy of the ummah. Zakat is only obliged to be given to Muslims by Muslims, not paying zakat to non-Muslims or infidels.

Thus a brief explanation of zakat, infaq and alms and the differences between these three terms, hopefully it will be useful and add to our knowledge.