Bali is one of the tourist destinations in Indonesia which is famous not only locally but throughout the world. The beauty of this island of the gods is able to bewitch many domestic and foreign tourists, not only beautiful with a thousand oceans but also famous for its super delicious Balinese food and various kinds of traditional Balinese culture to become an extraordinary spectacle.

Maybe you think Bali’s delicious food is chicken betutu. Make no mistake, there are many other types of food that can conjure your lips and you won’t stop wanting to try them. So, in this article, we present 10 typical Balinese dishes that you must enjoy when you travel there. Try to compare the deliciousness with the food in your area, you will definitely get the latest experience in your culinary tour. Immediately, we see the typical Balinese culinary that we have prepared below.

Balinese Food That Makes You Want to Try Again

Lawar is a Balinese food made from minced meat mixed with vegetables. What makes this food unique is the spices made from Balinese spices. This food is very delicious to eat and be eaten together with satay lilit from Bali as well. In addition, hot white rice will certainly make you sweat eating it.

If you go to Bali, try this lawar food, surely you will get the latest experience from the culinary side. Lawar is often a dish in homes in Bali or in restaurants, as well as in ordinary restaurants. So, it is not difficult for you to find this special food when on vacation in Bali. Lawar is a food that does not last long, at least it only lasts half a day because besides vegetables there are also coconut spices added to it in addition to other special spices.

From the name, there are several kinds of lawar. Usually, lawar food names are grouped based on the meat added to it, based on vegetables, or based on the lawar color itself. For example, if the meat added is pork (it is haram for Muslims) it is called lawar pork, if it is beef, then it is called beef lawar, if you use jackfruit it is called lawar jackfruit. There is also another type, namely a mixture of several lawars called lawar padamare. Meanwhile, from the color types, there are red or white lawar foods. Lawar food is often made with pork or pork blood, so it is not halal food for Muslims. 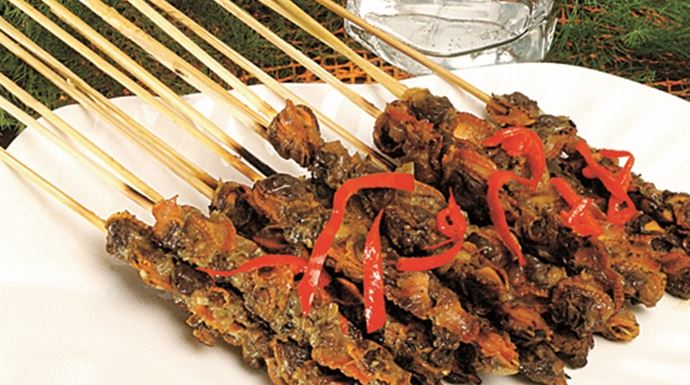 Rujak pindang is made from mango slices in such a way which is then mixed with super spicy pindang sauce because it is mixed with lots of chilies. Apart from using mango, rujak pindang can also use other foods such as seaweed. If you are traveling to Bali you will definitely find seaweed salad.

This Rujak Bulung is a typical Balinese salad mixed with spicy spices so that it gives a hot and different sensation on the tongue. Rujak that uses seaweed is usually equipped with salt, shrimp paste, cayenne pepper, grated young coconut, kencur, then pour the pindang sauce on top. If you are in Bali you can easily find this typical Balinese food along the Blambangan road. 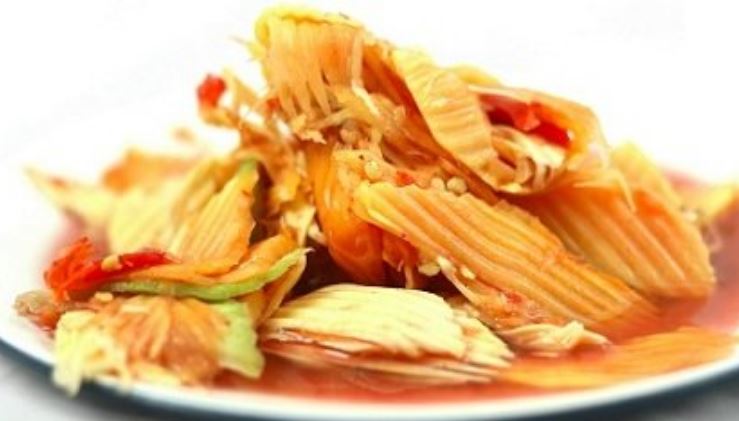 Komoh is a sacred food for Balinese people, they usually make komoh when there are religious pickles. It is also not halal food for us Muslims because this food is mixed with pork. However, there are also komoh foods that are made using chicken and duck meat.

Komoh Bali is food made from raw meat which is finely chopped, seasoned and then poured with hot water. This water is then added with fresh blood and salt to taste. This special food is a symbol of this blood according to the Bhairawa tradition. This proves in the ancient Bhairawa ritual the use of blood is very strong. They did this in hopes of gaining strength from the Bhairawa god of worship, namely Dewi Sakti or Dewi Durga.

So, Balinese who drink this food expect to get physical and spiritual strength from their idol gods. 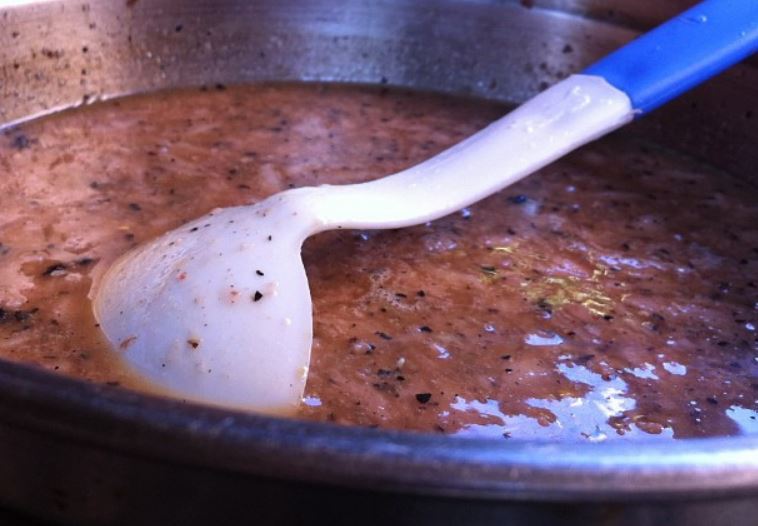 Chicken tum is one of the Balinese specialties that you should try. Tum is a typical food made from chicken, coconut milk and various spices such as pepes elsewhere. The mixture of the ingredients is all wrapped in banana leaves and steamed. If you don’t use chicken, you can replace the meat with your favorite meat.

Tum Ayam typical food is one of the foods that many tourists hunt so that restaurants have made this food their mainstay. Chicken Tumn is liked by many people, both children and adults. You can find this special food around Bali’s tourist destinations.

When viewed from the name, TUM means wrap and chicken is chicken meat. So this is a traditional Balinese food made from chicken wrapped in banana leaves.

Furthermore, the typical Balinese food is sate plecing. For those of you who want to go to Bali, don’t miss this food. Sate plecing has a distinctive flavor with a mixture of cayenne pepper, tomato, shrimp paste, salt, and lime juice. This food has a spicy taste on the tongue, tasty and slightly salty but delicious on the tongue.

This food is made from various types of meat, such as chicken, pork, and other meats. Be careful if you look for this food in a place where there is no halal, because it is possible that it is made from pork which is haram for consumption by Muslims. 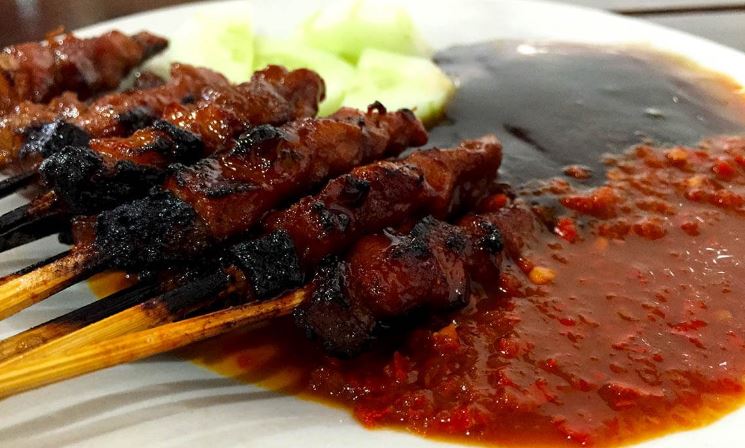 This tepeng rice is mushy rice served quite soft. There are various spices served with this fried rice such as long beans, young jackfruit, red beans, eggplant, grated coconut and Moringa leaves. Besides that, there are also additional shredded chicken and eggs which will certainly spoil your tongue.

Nasi Tepeng is a typical Gianyar Balinese food that is unique but tempts many tourists. This rice has something in common with Nasi Uduk that has been menusantara, the similarity lies in being equally tasty when eaten. This savory taste may be from the coconut milk used as it is in Nasi Uduk. At the top of this tepeng rice is seasoned or flushed with Balinese spices, this is what makes this food incomparably delicious. 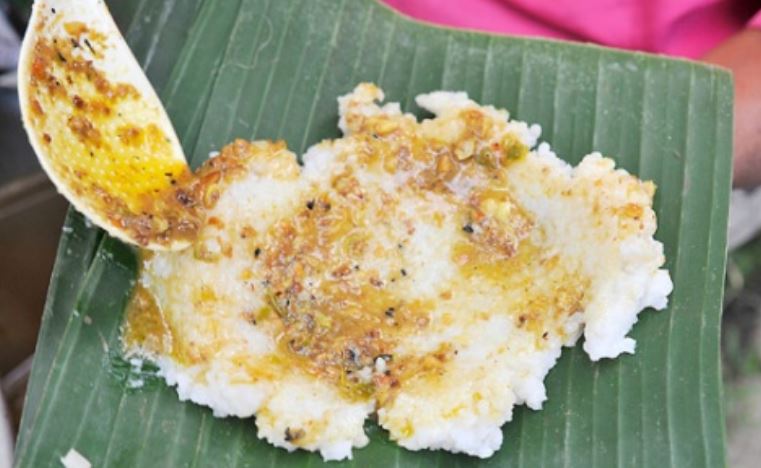 The next Balinese food is Nasi Jinggo. You can say this is cat rice, because this rice is only a little as big as a fist like cat rice. In addition to rice, it is topped with fried noodles, shredded chicken and fried tempeh and then wrapped in banana leaves.

Eating Nasi Jenggo is guaranteed that you have to add it because it’s small and tastes delicious. The chili sauce is so spicy that it makes your lips tight when you taste it. Nasi Jenggo is not only sold on the streets but this unique rice is also served at religious events such as Ngaben, birthday celebrations, and meetings.

If you buy rice to eat, you definitely have to buy 4 packs of at least because the contents are very small, but don’t be afraid the price of a pack is around 2 thousand to 4 thousand, as quoted by Wikipedia. 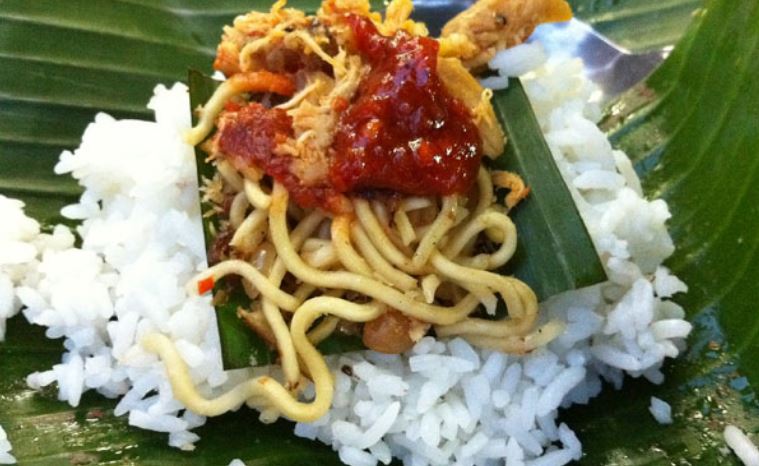 It is incomplete if there is no pork roll, because this is a list of Balinese specialties. However for Muslims this is haram food which is sinful if consumed. So, this is specifically for Balinese people only.

From the name we know that this is food from pork and does not use meat other than pork. So, this is 100% haram in consumption. But for those of you who are not Muslims, please just enjoy this food.

Babi guling has a soft and tender texture so that this food is sought after by local and foreign tourists, of course those who are not Muslims.

As the name suggests, this typical Balinese food is not from skewered meat as generally satay, but it is made from meat that has been mashed and wrapped around lemongrass stalks. Usually they make this food not only from chicken meat, there are pork and mackerel meat.

So, it seems to the Muslim ummah that it is not suitable for this culinary delicacy unless it is actually halal star meat eaten according to Islamic law and cooked by Muslims.

Apart from the meat we mentioned above, there are also satay lilit made from turtle and beef. The meat is then mixed with grated coconut, lime, coconut milk, shallots, and pepper. Then smeared or wrapped around a wide skewer, not small and pointed like a regular skewer. The wide skewers allow the meat to stick more.

Those are the 10 lists of typical Balinese foods that you should try especially for non-Muslims, because most Balinese food is made from pork. However, Muslims who are on vacation in Bali can look for Islamic restaurants or places to eat that specifically provide Halalan Thai food. Thus, at a glance, this culinary tour may be useful.

Plate Dance: Typical Culture of West Sumatra, This is the Explanation

List of Tasty and Healthy Foods for Low Blood Sufferers