Facts about Kaaba Baitullah – Kaaba is the center of the Islamic world and is the most architecturally important building in Islam. This cube-shaped building is a sacred place that is the point of unity for Muslims around the world. The Kaaba is a sacred structure that was built by the prophet Ibrahim (AS) with his son Prophet Ismail (AS) as the realization of the command of Allah SWT. Since its establishment for centuries, which have been changing well until now, Kaaba has undergone several changes, including one of the changes occurred during the time of the Prophet Muhammad PBUH itself. This box building is a place for the Hajj for millions of Muslims around the world. In addition, millions of Muslims in all corners of the world face this Kaaba when performing prayers five times a day and night. (see too: Types of Hajj: Hajj ul-Ifrad, Hajj ul-Qiran, and Hajj ul-Tamattu’)

Want to know facts about Kaaba, we will review it below. The sacred building of Muslims until the end of time. When the Kaaba no longer one performs the Tawaf, then Allah will lift It from the earth and this is a sign that the end of the world (Kiamat) is coming soon. Let’s see what are the facts about Kaaba the holy Baitullah.

The Facts about Kaaba (Baitullah)

The kaaba has undergone several changes since the past, and it is believed that the kaaba today is founded on the original foundation upon which the prophet Abraham built it. Over the past centuries, this building has been reconstructed several times. That said, the structure of the kaaba today is not the same as that which was built at the time of the prophet Ibrahim (AS). Kaaba has undergone several reconstructions due to several disasters that occurred in the past. A major renovation occurred in Kaaba during the period of the prophet Muhammad SAW before he reached the prophetic period.

1. There was almost enmity when laying the “Hajar Aswad stone” 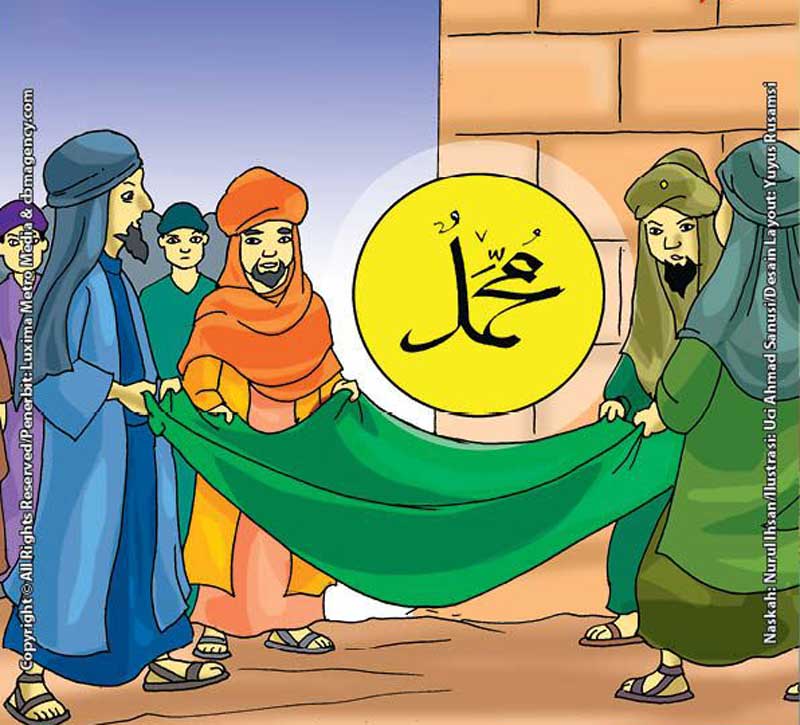 At that time, there was almost enmity between the people, where all of them wanted to contribute in placing the Black Stone. This was immediately taken by the Prophet Muhammad SAW wisdom to prevent tribal hostility at that time. The brilliant thought of the prophet Muhammad SAW has provided a solution to this problem. He provided a solution by placing a stone on a piece of cloth and each tribe could hold the cloth to participate in placing the Black Stone.

The Quraysh also agreed to use the money from a pure source to use it for the construction of the Kaaba. However, at that time there was not enough pure money so the construction of Kaaba was smaller than the previous version. (source) Then, the last renovation of Kaaba took place in 1996, when there was a lot of stone replaced from the Kaaba foundation, and the roof used a new roof.

Kaaba used to have two doors and one window. So, you need to know that in the past Kaaba had two doors, one door to enter and the other used as a door to exit. There was also a window located on one side of Kaaba and this lasted a very long time. While the Kaaba that we see today or the one that exists today only has one door and no windows.

More to see: Maqam Ibrahim and Its Historical Significance

Now, we see that the Kaaba is covered with black silk and inscribed with calligraphy with gold pins. We never imagined that Kaaba had other colors. Though, facts about Kaaba said that before the time of the Abbasids, the Kaaba was covered with various colors, including green, white and red.

4. The key to Kaaba is held by one family

At the time of the Prophet Muhammad, that the key to the Kaaba was held by people from the Qurasiy tribe. Then, lose control of these trusts except for one. After conquering Mecca, the Prophet Muhammad was given the key of Kaaba, but he handed it over to Osman ibn Talha of the Bani Shaiba family. This is a family that for centuries has been the key holder of Kaaba. Then, Rasulullah SAW said that this will be true until the end of time. In a Hadith the Prophet SAW said which means:

“Take it, O Bani Talha, eternally up to the Day of Resurrection, and it will not be taken from you unless by an unjust, oppressive tyrant.”

5. In the past, Kaaba was open to the public 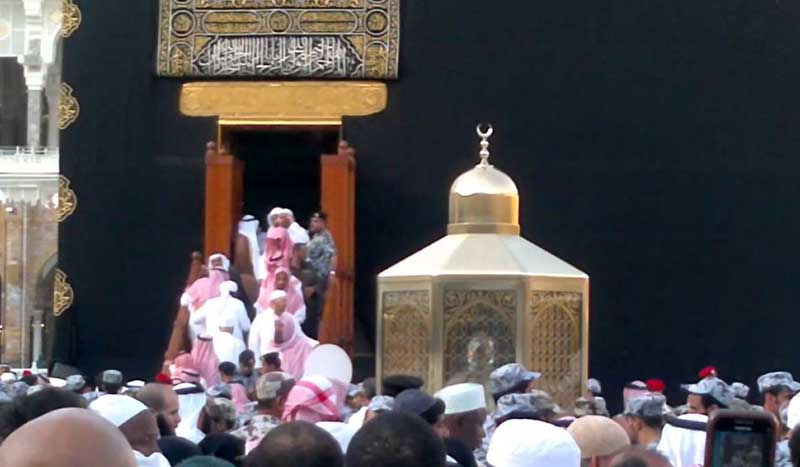 6. People can swim around Kaaba

During the rainy season and Kaaba in the valley is often flooded. This is common when in Makkah there is no good drainage system to control flooding. When there is a flood, people who perform Tawaf usually do it in water with half of their body submerged and sometimes swim around the Kaaba.

7. Inside the Kaaba there are many plaques

8. There is another Kaaba in the sky

Kaaba does not only exist on earth, but another Kaaba in the sky which is called “Baitul Makmur“. This kaaba is mentioned in the Qur’an and also mentioned by the Prophet Muhammad. when he told about the journey of Isra ‘Mi’raj.

“Then I was shown Al-Bait-al-Ma’mur (i.e. Allah’s House). I asked Gabriel about it and he said, This is Al Bait-ul-Ma’mur where 70,000 angels perform prayers daily and when they leave they never return to it (but always a fresh batch comes into it daily).”

9. The Black Stone is broken

The black stone (Hajar Aswad) was damaged in the past by the actions of the extreme and extreme Ismaili groups from Bahrain and they are called the Qarmatians, who say that the pilgrimage is an act of superstition. They killed thousands of Hajis and threw their bodies into the well of Zam Zam.

They have also brought the Black Stone to the east of Arabia, Kufa and to Iraq. However, they were forced by the Abbasid Caliph to return it. At that time the stone was broken into pieces and then put back together using silver, as we see today.

10. Kaaba was never meant to be cube-shaped

According to itimaar.co.uk, one of the least known facts about Kaaba is its shape. Actually, kaaba is not meant to be shaped like this (cube). The original form of the Kaaba is rectangular and includes the semi-circular area of ​​Hijr e-Ismael. A surprising fact about Kaaba that very few people know about.

Maqam Ibrahim and Its Historical Significance

Sa’i between Safa and Marwa Hills