by ubaid
in News, Traveling
0 0

Did you know that the Al-Aqsa Mosque was previously the mecca of the Islamic ummah. This means that the Muslims of Salah face al-aqsa before being ordered by Allah to face the Kaaba in Mecca. This is the reason why Al-Aqsa Mosque is a very important site for Muslims. Once in the time of the Prophet SAW, he was ordered by Allah to make a night journey from Makkah to Masjidil Aqsa (Isra), and then depart from Al-Aqsa Mosque to the seventh heaven and above again which is called Sidratul Muntaha.

This is an important journey in Islam because Allah ordered the Messenger of Allah to take orders Salah 5 times. So, speaking of Al-Aqsa Mosque, it is not something that is usual for Muslims and for this reason also the Muslims of the world must defend this holy site. 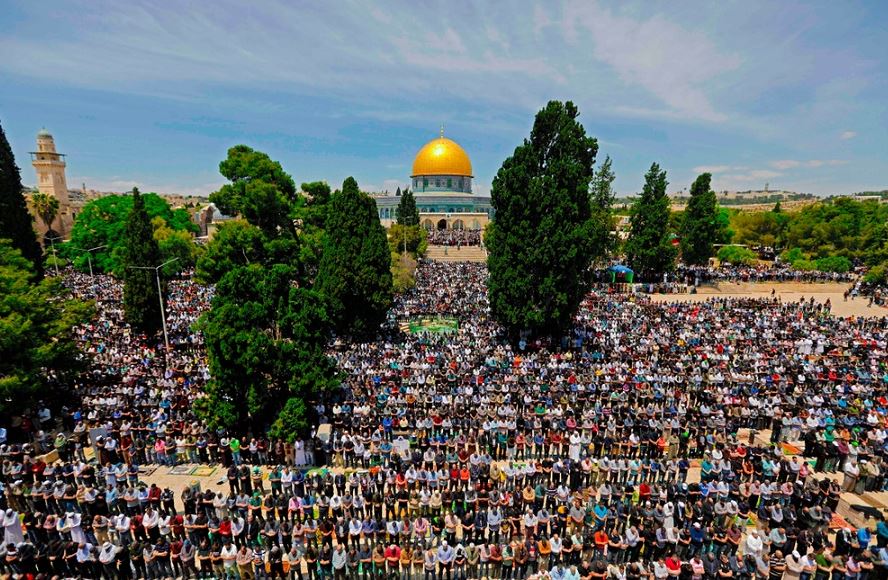 At that time the Israelites immigrated to Egypt in search of a decent and better life, but the Israelites became slaves in Egypt and then the Prophet Musa as. commanded by God to save them. But the Israelis refused to return to Palestine, and because of this they were expelled and wandered in the desert for 40 years. Such is the history of the past Jews. After that the prophet David as. started his kingdom in Palestine with his son and he rebuilt the al-Aqsa mosque with the help of the residents in that place. At that time, he also built a palace.

The Importance Story of Al-Aqsa Mosque

Al-Aqsa Mosque is a place that has an important role for the prophet Muhammad SAW. Why the al-Aqsa mosque is so important for Muslims is because it is the center of Muslim life or Monotheism and is the first Qibla direction of Islam. After some time facing the al-Aqsa mosque, then he was ordered to face the Kaaba. The abomination of Isra happened one night or on the night of 17 Rajab, when the Prophet SAW was sleeping in the Kaaba, the angel Gabriel came with Buraq and took the prophet to travel from Mecca to Baitul Mugaddis and then to the seventh heaven or Sidratul Muntaha.

After the Prophet Muhammad died, then the second Islamic caliph named Umar bin Khattab entered the city of Jerusalem peacefully without bloodshed, this happened when he was invited by Christian leaders. Umar’s arrival was their release so it was not difficult for him to be in their midst.

In its history, the Al-Aqsa mosque underwent several architectural changes. The mosque was built on a platform that fits the complex typographical arch conditions. In 1922 the first mosque renovation took place, at the time of this renovation the foundation of the ancient Umayyad mosque stood, this had changed the interior columns and replaced them with beams. The southern wall was also rebuilt and replaced with wood with a concrete plate.

But then there was an earthquake, and this had damaged some parts of the renovation, and finally the architecture of the al-aqsa mosque came down as:

Al-Aqsa Mosque is an important part of Islamic history, and a symbol of the greatness of Allah. So for Muslims visiting a site like this is important to know its history and see for yourself part of the history of Islam in the past and until now the most important thing in history. History is evidence of the past for those who live today, and forgetting history is a sign that someone was not responsible for previous lives.

What is the meaning of al-Aqsa?

Al-Aqsa means “farthest” or can be interpreted as the furthest holy place. It is said that because the Messenger of Allah (PBUH) traveled a long night (isra).

Called as Haram ash Sharif because it is a noble place that became the basis of the historical journey where the Prophet SAW did it by riding a buraq to the highest sky.

Why is Al-Aqsa mosque important?

Al-Aqsa Mosque is considered important because it has great historical value. In addition to the journey of the prophet with the angel Gabriel from Mecca to al-Aqsa, this was also the mecca of the Islamic Ummah in the early days of the arrival of Islam.

Why is it called the Night Journey?

It is said to be a night trip because the prophet with the Angel Gabriel drove Buraq to travel at night from Makkah to Jerusalem, Palestine (al-Aqsa)

Who built the Al Aqsa Mosque?

The one who built the al-Aqsa Mosque was the prophet Ibrahim AS.