by Sarah
in Art, Information
0 0

The development of the increasingly modern era is a necessity, but the culture of the nation must always be preserved. Traditional clothing in Indonesia is one of the most valuable assets, so it must be preserved and introduced to the world that Indonesia is a cultured country. Not only that, the use of traditional clothing in every ceremony or celebration in a region provides evidence that Indonesia as a pluralistic country is still able to preserve its culture.

Traditional clothing is not only a status symbol of areas in Indonesia but also the introduction of cultures in each region throughout the world can be a uniqueness of the nation that can attract many tourists to come to Indonesia.

Various types and patterns of traditional clothing from all over Indonesia as well as a variety of musical instrument arts from various regions are its own characteristics and a feature that even has historical values ​​behind it. So, love, ishallah this time we will discuss traditional clothes from all over Indonesia as learning material for our children so that they know their nation and understand this diversity.

Ok, let’s just take a look at the following traditional clothes in Indonesia

On the day of the wedding, the house of the two brides will also be decorated with typical Acehnese decorations. In addition to parties, the use of traditional clothing is also seen when celebrating an event related to Nanggroe Aceh, such as a traditional ceremony held by the wali nanggroe.

Jakarta is famous for its Betawi tribe which is very thick with customs and culture. One proof of this is the distinctive traditional clothes. Traditional Betawi clothing is influenced by several cultures such as Arabic, Western and Malay cultures.

West Java has traditional kebaya clothes that are used by aristocrats and commoners. Even though they are both from kebaya, each outfit has a difference.

Women and men have clear differences starting from their patterns, even the basic fabric used.

In fact, the batik used is the original batik which is famous for its manual writing. So, the batik is not batik like what many people use where the flower patterns are stamped or use a stamp machine.

Yogyakarta is also famous for its rich culture and customs. They have traditional clothes which are called kesantrian clothes of the province of D.I Yogyakarta.

Jojakarta, is not only famous for its natural beauty which is a tourist attraction, but also known as an area that still maintains its cultural values until now. So that there are still many sacred things encountered until now.

Jogjakarta traditional clothes should not be used carelessly, including not being used at ceremonies carelessly. In addition, traditional clothing must also be properly cared for in accordance with the recommendations and regulations of the palace.

Furthermore, Indonesian traditional clothing is from Madura, East Java. Their traditional clothes are known for being simple and modest because they only wear striped undershirts and wear loose trousers for the men. For women, they usually wear kebaya clothes with long skirts that stick down.

So, for those who wear traditional Balinese clothes, we can distinguish their age, gender and social status from the style of clothing and ornaments that are attached to the clothes.

West Nusa Tenggara also has traditional clothing, which is native to Lombok Mataram. Traditional Lombok clothes are usually worn at events such as weddings, ceremonies and other traditional ceremonies.

One distinctive and unique feature of traditional Lombok clothing is that men use distinctive songket fabrics and seem unique and elegant. This songket cloth is not only attractive to local people, but many tourists buy it as a souvenir from Mataram or from West Nusa Tenggara.

West Kalimantan’s traditional war clothes are quite different, because they use bark which is processed into cloth and made into war clothes. To be able to get bark that can be made as not as mixed. But they use Ampuro wood bark.

Until now they are still able to make their own clothes from this bark, this skill was acquired from generation to generation from their ancestors.

See also: Map of Indonesia and Everything About Geographical 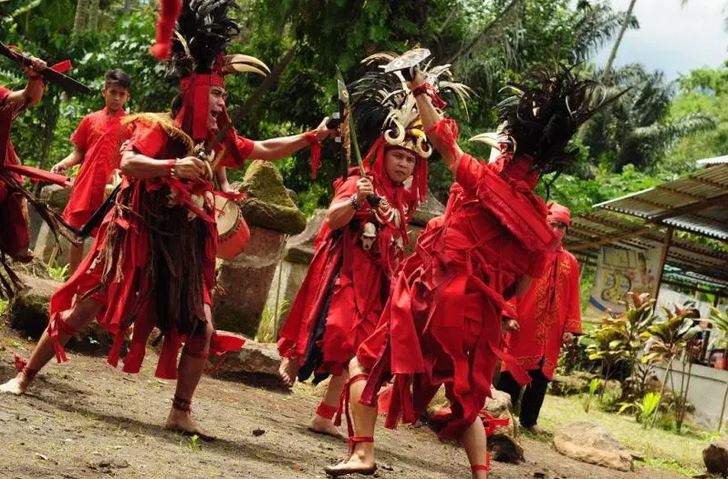 The traditional Nggembe clothes are rectangular to the waist with a round collar and large wide sleeves.

Furthermore, traditional clothing from Indonesia is clothing originating from Maluku. The Cele Maluku shirt has its trademark, namely clothes with small squares and geometric lines. The use of cele clothes is usually accompanied by wearing a sarong with a matching color.

The traditional clothing of Gorontalo province has a distinctive color. There are three colors that stand out from this traditional outfit and these three colors have their own meanings. The three colors embedded in the clothes are light green, golden yellow, and purple.

They do not only wear traditional clothes but they also wear various ornaments and jewelry including on the head and face. not only that, to display a more elegant impression they also wear jewelry such as rings, bracelets, necklaces and even use tassels on their feet and hands.

For men, wearing Papuan traditional clothing is also equipped with a spear and shield so that it gives a more manly and mighty feel. For women, Papuans also make up their faces with red paint. This red caata is none other than the red fruit of Papua.

100+ Ethnic Groups in Indonesia and their Regions of Origin [Complete]

10 Cartoon Houses That Exist In The Real World

We have known the world of cartoons and comics for a long time and even decades ago, have you ever...

Puma Punku is a large complex that is said to be a large temple complex in the past. This large...

Storybook Houses - A house like in a fairy tale, but it is real. The shape is unique with a...