10 Cartoon Houses That Exist In The Real World

We have known the world of cartoons and comics for a long time and even decades ago, have you ever dreamed of living with the cartoon characters you like, or living with them in their homes. After years of wanting it that way, now there are several buildings that are the incarnation of comics or cartoon life.

The desire to go to school those who are in comics or treasures and so on. Now we have the opportunity to enjoy what the characters in comics or cartoons enjoy. We can now place ourselves in a fictional world. For example, Snow White’s cottage with its melted roof, SpongeBob’s pineapple house the same size as in the cartoon, or a cozy hobbit hole. All things related to the past in comics and cartoons are now real and we can enjoy them in the real world.

Now, loveinshallah.com wants to show you there are at least 10 replica houses, fantasy houses that you can actually visit for real. Let’s take a look at your favorite houses one by one in the world of cartoons or the world of comics. 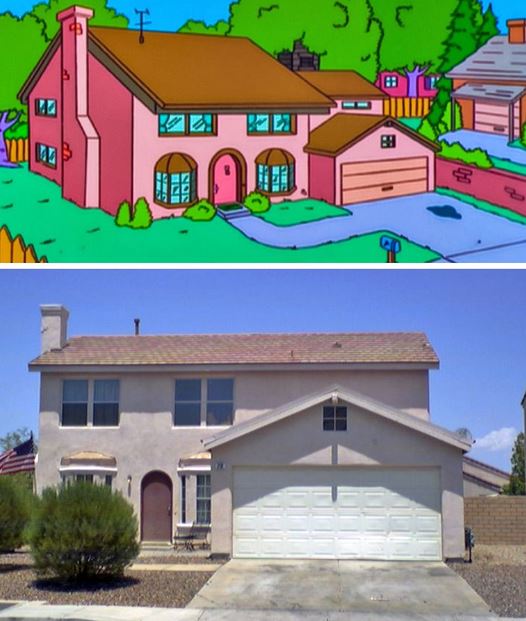 Let’s take a moment to go back to last year, 1997, 20th century Fox has a way of promotion that doesn’t make sense. To make a replica of the Simpsons’ house in Nevada, USA. Then he gave this house in a contest at that time. The $120,000 house he built to bring to life the house in the cartoon. This is a cartoon version of a real house, so it’s designed to be exactly the same from the inside as well as the outside. But the winner of the contest didn’t take the house, he chose money only at a price of $75,000 in cash. Now the house that embodies this cartoon is part of commercial real estate.

Also see: Anatoli Bugorsky: The Man Who Stuck His Head Inside a Particle Accelerator

2. The house from movie, Up

The house from the movie, Up is another cartoon house now made real. This is the house of little Carl and Ellie, the house is colorful, adorable, inspiring and very popular in the cartoon world. This house was built in 2011, this is part of the desire of the Make-a-Wish foundation.

This cartoon house is carefully designed and pays great attention to every detail of the part to make it exactly the same as in the cartoon. Everything is made just like in a cartoon, such as the letter box outside the house, the weather vane, the photos on the wall, the floorboards and even the light switch. Now this house is in Utah and can be visited by every tourist. For those who like it, they can also take pictures so that there is an impression as if they are living in a fairy tale world.

In 1976, an architect named William Nicholson built a house with the aim of testing building materials.

This dome-shaped building is named “The Flintstones’ house” due to its resemblance to a stone age house. This house is in California, the inside is white, so it stays cool in the summer. This cartoon house was built at a cost of $4,000,000. 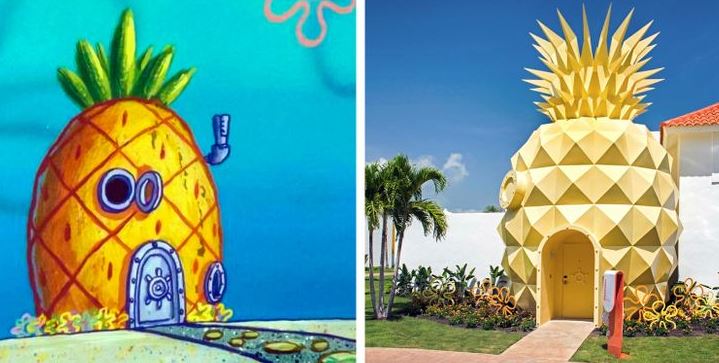 This is SpongeBob’s pineapple house. This is a cartoon that has always had fans from generation to generation. This pineapple house is on the seabed and its condition is very attractive to many people. But now you don’t have to dive to the bottom of the sea to see it, this replica of SpongeBob’s house is now on land and can be visited by tourists.

Everything in the SpongeBob cartoon is in this house such as the TV, underwater decorations, cell phones. This pineapple villa was created by Nickelodeon and Nick Resort Punta Cana located in the Dominican Republic.

Another unique house that is a replica of the cartoon house, this is the Hobbit Hole. Designer, builder, and family father Simon Dale built this Eco-friendly home. This house was built from shavings of oak, but uses stone walls, and mud thatched on the floor, walls and roof. The solar panels function and can provide electricity naturally from the sun’s heat. The roof design is also attractive and can provide natural light, nearby there is also a spring that provides clean and fresh water. Water from the roof is accommodated as water for the garden and the toilet is used as compost. 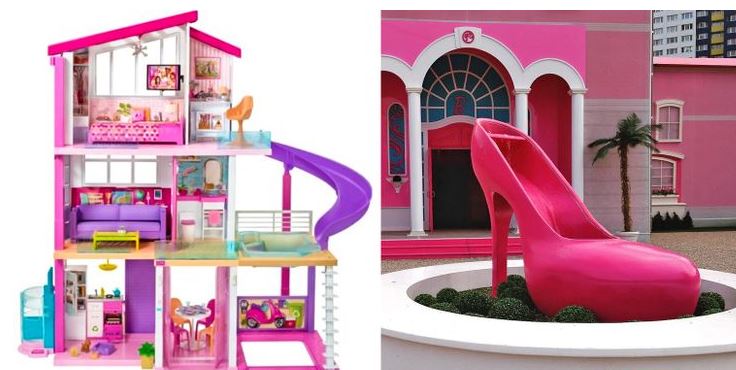 Barbie is a cartoon movie that really hypnotizes many viewers. There are even viewers who are willing to change their body shape to look like a barbie even though they have to spend a lot of money.

Many little girls who watched this film dreamed of living with a barbie or being in a barbie world. Now at least this strange dream can come true. Now the barbie’s house is being built on a 10,000-square-foot spot in Florida. This house is called “Barbie, the Dreamhouse Experience”. It said the house had spent no less than 100 gallons of pink paint and 20 pounds of glitter. 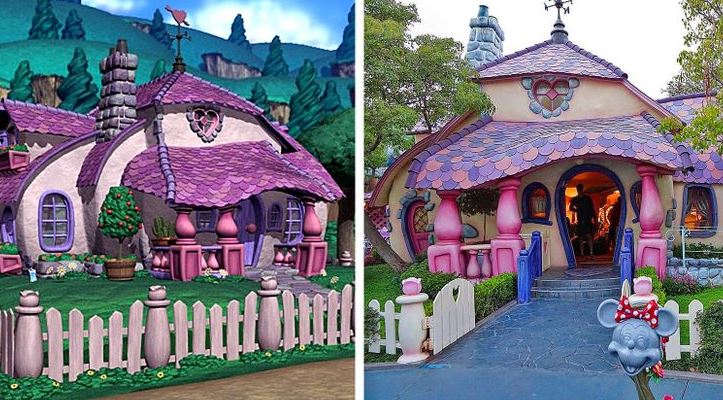 There is also a house from a fairy tale world that is now present in the real world, its name is Minnie Mouse’s house. You can find this adorable house at Mickey’s Toontown in Disneyland, in Florida and California.

Don’t make a fool of yourself with the design, it may look like a cartoon, but in the interior of the house, everything is complete like a real house.

Everything is here back last year, skypad apartments from cartoons inspired by futuristic buildings of the early 1960s, a time when people imagine what apartments in the future will look like. This futuristic Jetsons apartment is inspired by Chemosphere, a famous building in Los Angeles. 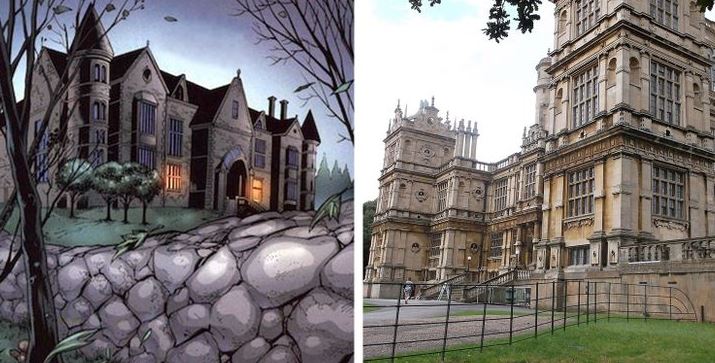 The Bruce Wayne Manor in DC comics about Batman was inspired by Wollaton Hall in Wollaton, Nottingham, England.

Have you ever wanted to live in a house with your favorite character? If so, maybe you want to visit one of these places.

This snow house is unique, it is the inspiration of Snow White and the Seven Dwarfs. To create this unique masterpiece, the builders spent 30 years. This snow white-inspired house is located in Washington, and there are no square corners, you can check, for sure you won’t find corners. The roof looks like it’s melted, the wooden beams are hand carved. Everything is just as rough and full of character as in the Walt Disney cartoons.

Those are 10 fairy tale houses that actually exist in the real world. This may be a crazy idea but it is very inspiring and becomes a unique and expensive masterpiece.

The 9 Best Substitutes for Cardamom for Cooking

The 7 Best Essential Oils for Focus and Concentration

How to make date paste as a food sweetener instead of sugar, this is what we will explain here. Dates...

Soon we will be harvesting a lot of Zucchini and now the most important thing is knowing how to freeze...