Have you ever read surah ad-Duhaa? Maybe you often read this letter every night.

However, do you know what lessons you can learn from Surah Ad-Duhaa, let’s look at the following.

4 Lessons that Can be Taken from Surah Ad-Duhaa

In the first verse of Surah Ad-Duhaa, Allah swears by the time of Duhaa. Duhaa is the middle of the morning when the sun has risen until the sun has slipped. This shows that the ad-Duhaa time is a special time and at that time it is also sunnat to perform Salah Duhaa as much as 2 raka’at (minimum) and 8 raka’at as good as possible. But the maximum is 12 rakaat. 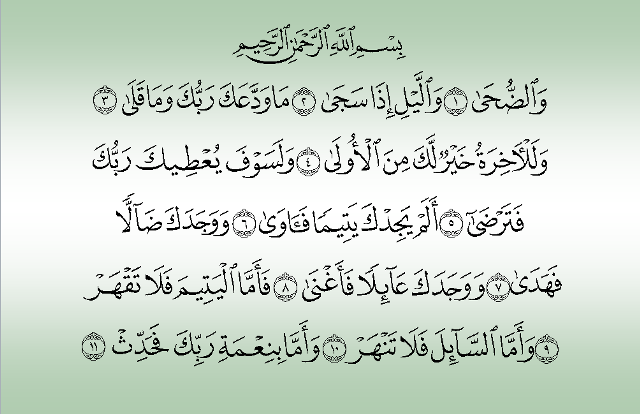 “Whoever does Salah Fajr in congregation, then remembers Allah until the sun rises and then does Salah Duhaa, then he will get the reward of Hajj and Umrah.”

We are reminded that whenever there is light there is always hope. Every time the sun rises, Duhaa time comes and gives light and hope. The rising of the sun is a new opportunity to do good, change for the better. There is always hope that something can always develop and get better.

“If a person is happy in the afterlife, then it will be forever, and if someone is going to be wretched, then it will also be forever”. So, don’t be fooled by the life of the world. The world will be meaningful and valuable when used for the hereafter.

We are reminded that the life of this world is nothing, and the real pleasure is in the hereafter.

A narrated by Imam Ahmed that Abdullah bin Mas’ud said, ‘The Messenger of Allah was lying down on a straw mat and it left marks on his side. Then when he woke up he began to rub his side. So I said, “O Messenger of Allah! Will you allow us to spread something soft over this straw mat”. He replied, “I have nothing to do with this world. The parable of me and this world is like a rider who rests in the shade of a tree, then he passes on and leaves it”’. [Tirmidhi]

The third verse of Surah Ad-Duhaa reminds us that Allah will give us great favors and make us satisfied. Allah will not waste His servants who believe and fear Him.

A man from Kufah came to ask Sayyiduna Muhammad al-Baqir, he asked “whether the hadith of the Prophet’s intercession was authentic?”.

He confirmed this and said: You say that the most hopeful verse in the Quran is “My slaves who have wronged themselves, do not despair of the mercy of Allah. Allah forgives all sins. Truly He is the All-Forgiving, Most Merciful” [39:53].

But we say that the most hopeful verse in the Quran is “And your Lord is going to give to you, and you will be satisfied’ [93:5]’.”

The Prophet Muhammad (PBUH) loved his ummah very much and was not happy if his ummah went to hell. He will intercede for each of his ummah. So, one way is to multiply shalawat on him as proof that we love Rasulullah SAW, love his friends and family.

We must remember that all that we have today, the blessings in our lives, are all the will of Allah. If there are orphans, do not wrong them, do not take their property. If someone asks you don’t refuse, give him as much as you can.

Allah has given us enough of His blessings. So, respect each other, help each other in this life.

There are many blessings if one wants to provide for orphans. Rasulullah SAW raised his index and middle fingers, and said: I and the sponsor of an orphan will be like these two (fingers) together in Paradise’.

In short, here are 4 simple but very deep lessons that we can take from Surah Ad-Duhaa, hopefully we are really concerned with the eternal life of the Hereafter, and use the life of this world for the benefit of the Hereafter.

The real life of a Muslim is in the afterlife, and this world is only a shelter. The world is only temporary, and the hereafter is eternal. So seek pleasure for eternal life, and do not fight each other just to get temporary pleasure in this world and you forget about eternal pleasure.

In the Qur'an there are four surahs called Quls, because this surah begins with the sentence quls. What are the...

How to make date paste as a food sweetener instead of sugar, this is what we will explain here. Dates...

Soon we will be harvesting a lot of Zucchini and now the most important thing is knowing how to freeze...