Sarah Jacob’s Story – There are many people who say that he can survive because he doesn’t eat. Those who claim to be able to survive without food later call themselves “breatharians”, claiming that they live only in air and light.

Breatharianism is a hoax and totally an unreliable statement. It is impossible for a living being without the need for food. The bodies of living things, including humans, need food to survive. In their deceptive teachings, breatharians are also secretly eating. While some people secretly follow the teachings of this hoax – who really don’t eat – it turns out that they starve to death because they follow the breatharian lifestyle. One of the things that caught the world’s attention was the death of Sarah Jacob, who is also known for proving that she can exist without eating. 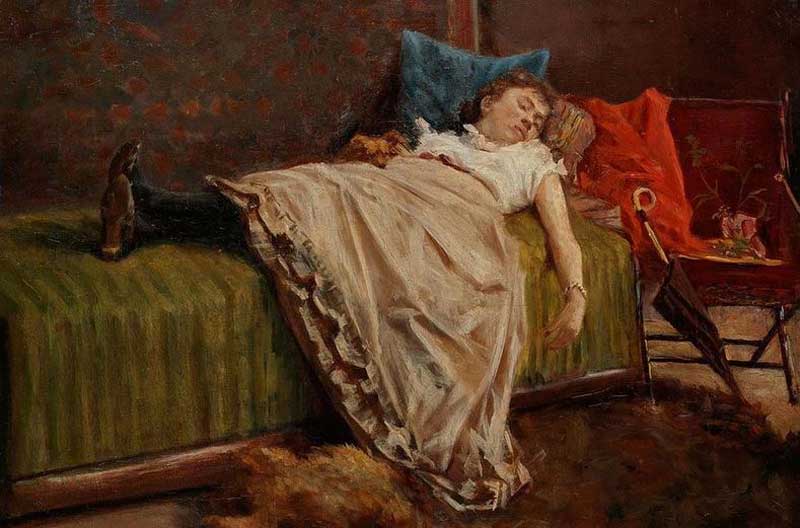 Who is Sarah Jacob?

Sarah jacob is a girl who was born May 12, 1857 AD, she was born to Evan and Hannah Jacob, they live on a farm in the village of Llanfihangel-ar-Arth in Carmarthenshire, Wales. Evan Jacobs is the father, he is the deacon in the local chapel. Sarah is a child who lives an energetic and shealthy life, she lives with good intelligence and is able to speak English well.

Then, in February 1867 or a few months before she reached the age of 10, this energetic girl fell ill and fell into a coma. One month later, she woke up from her coma, and by that time Sarah had completely lost her appetite. first few weeks: She eats little rice, oatmeal or milk. And later it was found out that she didn’t want to eat at all anymore and only survived by eating only a few pieces of fruit every day. So then, she stopped eating altogether. Knowing this condition, the parents were angry but she did not use Sarah Jacob to eat.

When the fasting period entered, Sarah was popular as a local celebrity at that time, even the newspapers were full of her name and magical stories about her. She is famous as a child who defies the laws of nature who live without eating. Some even from far away came to touch her face, hands and recited holy verses.

People who came to see her really believed that she was witnessing a miracle, but Sarah secretly turned out to be eating, this was not known by her parents. It is possible that she came out of her house while her parents were asleep and not knowing, she went out to eat in secret. Why this child refuses to eat, it is not clear why. Sarah is considered a religious child and many people assume that her current condition is full of spiritual values ​​or that she may be suffering from anorexia. Whatever the reason she didn’t eat, now she immediately felt the effects.

As Sarah Jacobs grew in popularity, time grew suspicious, and at that time Vicar devised a contingency plan and peeked into whether her family was secretly feeding her. This surveillance lasted for two weeks, but was not carried out all the time so that this finding was considered doubtful and needed stricter care.

Then in November 1869, when it was thought to have been two years after Sarah was supposedly her last meal. This is a more thorough form of supervision and is approved by her family. Four trained nurses sat and accompanied Sarah day and night to see if Sarah Jacobs was really not eating or not. At that time, the nurse had been instructed not to withhold Sarah from food if she needed or asked for food. This made Sarah feel trapped and she also seemed arrogant, and this arrogance kept her from moving and destroying herself. With this arrogance, Sarah Jacobs refuses to admit that she eats secretly. She can only hope to overcome everything by not eating, for 14 days it turns out that she has to cover her pride with her death because of the proof that he can exist without eating.

But earlier, the nurses had noticed that Sarah was getting weaker, and it was their fault that they had approached the family to feed her. However, this only made Evan and Hannah angry and they asked the nurse to keep an eye on her and keep an eye on her child. Then, on the eighth day, Sarah seemed to be delirious, she struggled and finally fell into unconsciousness like she had never before.

Later, an examination was carried out on Sarah Jacob, and by that time Sarah was already dead and the investigators said that the only reason why she died was starvation. Later, her parents were charged with premeditated murder in her case, probably because the parents did not allow the nurse to give any food to the child during the surveillance period. During the trail, the Lordship addressed the Grand Jury, dwelling upon the facts of the case:

It was the duty of all parents to supply food to their children of tender age, and this was the duty of the prisoners. They neglected their duty, and the death of one of their children was the result. There was no question whatever about the means of the prisoners to supply food, and it was clear that, up to the time the watching commenced, the child was in good health, having, indeed, all the appearance of a child enjoying excellent health. He should scarcely think it could be denied that the girl had been fed to the time that the watch commenced; and the question would naturally arise – ‘ By whom had she been fed ?’ Both the father and mother had waited upon her, making her bed, and were continually about her person; and she appeared to have for some time slept in the same room with them. Assuming, then, that she had been fed, it would be for the jury to consider whether the parents were in any way cognizant of the feeding. If they thought they were, then,whether the parents themselves fed her. If they thought they were not, then whether anybody else fed her, and whether the parents knew anything about it. If they came to the conclusion that she had been fed previous to the commencement of the watching from which she died, then they would say whether the prisoners, by refusing to give her food during the watch, and thereby causing her death, had neglected a duty which the law laid down as paramount in reference to the relations of parents with children. If they were of opinion that there had been this neglect, then the jury would have to say to what extent there had been criminality.

During the Victorian era, there were many cases like this among girls, they tried not to eat and proved to be able to survive. 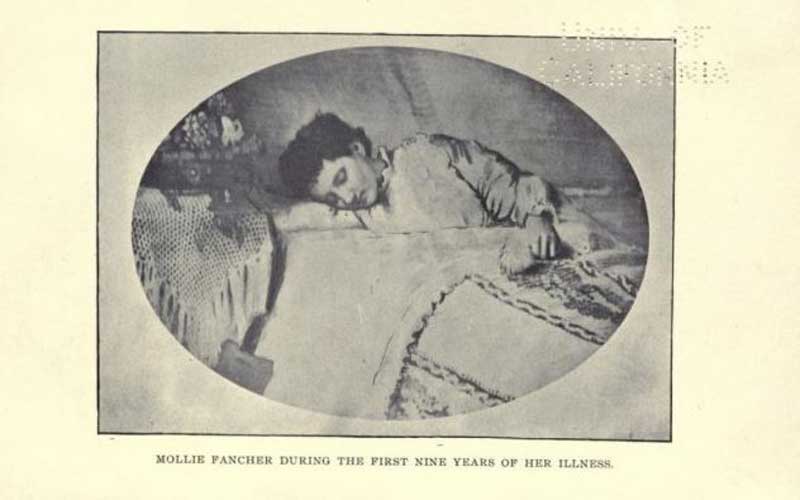 One of them is what happened to Mollie Fancher, she is a 17 year old girl and from Brooklyn, she fell from a trolley car, and her body was dragged so far down the road, this accident broke her spine, and lost both of her eyesight. She literally had to lie in her bed for 50 years. In 50 years of lying in bed, Mollie Fancher reportedly never ate and could live without food.

See too: Anatoli Bugorsky: The Man Who Stuck His Head Inside a Particle Accelerator

Mollie Fancher’s statements about this incident have never been verified, but many people are thought to have been deceived by this incident. Ann Moore of Derbyshire says she can’t hold on to food and says she hasn’t eaten solid food for 5 years. 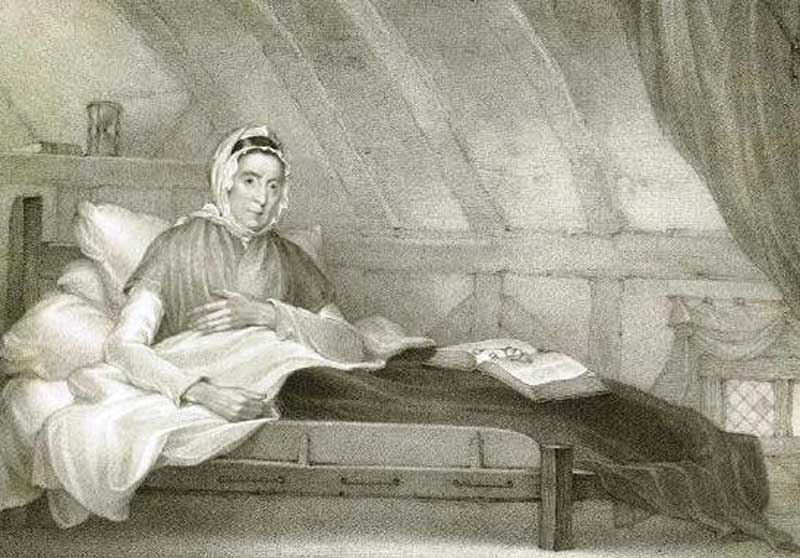 Just like what happened to Sarah Jacobs, where Ann became an object to be researched and monitored whether she didn’t eat or vice versa. But her fate was not like Sarah Jacobs who had to die from starvation. Ann is secretly fed by her daughter with the watchful eye of a guard in her room. But with the excuse of kissing her mother, her daughter gave it to her mother through her mouth. She also soaked a towel in milk and broth and then squeezed it in her mother’s mouth while she washed her mother’s face. This tactic was unknown to the guards and they thought it was just a face wash.

Again, something similar has happened recently. Around the 1990s, an incident similar to that experienced by Sarah Jacobs had happened to a breatharianism advocate, Jasmuheen, he was made a test subject for the TV program Australian 60 Minutes. After three days of not eating, he was in a bad condition and at his insistence he was transferred to the open, to be precise in the mountains, where he claims to be able to calm down and survive without eating because his body can absorb nutrients from clean air. However, his condition still worsened, where on the fourth day, this 60-minute tv program stopped the test for fear of being wrongly treated and Jasmuheen’s death.

Well, they stopped the test for fear of being found guilty of death, but this was not the case with Sarah jacobs. The nurses who looked after Sarah Jacobs should have ordered her parents to feed her child, or at least they could get away from her plot for a while. This is all on a moral basis that should be done.

But they did nothing to protect the child. As quoted from amusingplanet, they have pushed the child to death. However, it is very unfortunate because the judge only punished her parents and freed the nurse from her attitude.